How The Government Subsidizes Wall Street

Jeff Nielson writes that the Obama administration has helped large financial companies grow even larger while backing the derivatives market by guaranteeing Fannie and Freddie. He argues that the government has become a direct subsidiary of Wall Street. See the following post from The Street.

The Obama regime must feel like a jilted-lover, as Wall 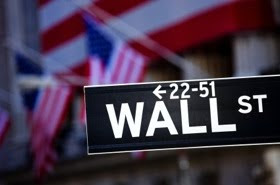 Street has chosen to expend the vast majority of their politician-buying dollars buying Republicans in the next election. After all, the Democrats have demonstrated that they can serve the bankers at least as faithfully and unreservedly as the Bush regime did before them.

None of those goals has even remotely been accomplished. Indeed, it is arguable that the Obama regime actually managed to make things worse in every respect. No one has been watching both the bankers and the farce of bank "reform" closer than Gretchen Morgenson of the New York Times.

In Count on Sequels to TARP, Morgenson explains the Democrats' most-important failure -- in the derivatives market. The "clearinghouse" which was created in the new legislation does virtually nothing to either regulate derivatives nor to make them more transparent. Indeed, all it really accomplishes is to increase "liquidity" for the bankers -- which always translates into the banksters simply ratcheting-up their leverage even further.

As if this wasn't bad enough, instead of merely having the implicit backing of the U.S. government in back-stopping the reckless gambling of the Oligarchs, an explicit government guarantee has been created for this "clearinghouse."

In other words, all the clearinghouse actually accomplishes is to create an explicit, unlimited "tap" of government funds -- directly from the printing press of the Federal Reserve and/or the coffers of the Treasury Department. Having "guaranteed" (and nationalized) the entire U.S. mortgage market, having provided an infinite "guarantee" on Fannie and Freddie's endless losses, the U.S. government is now explicitly backing the derivatives market.

The Obama regime (and their apologists) will disingenuously point to the "resolution authority" that was created in the so-called reforms. It is obviously totally meaningless. Governments could pass the "resolution authority" to end poverty, hunger, violence, or even to fly to another galaxy. Creating the authority to do something is irrelevant when there could never be a practical means of exercising such authority.

Specifically, in every meaningful way, the Obama regime has made the Wall Street Oligarchs even more "too big to fail." To begin with, all of the Oligarchs (except AIG) are much bigger than before -- having not merely been allowed to cannibalize many of their former brethren, but receiving trillions of dollars in government handouts/guarantees/loans (mostly from Republicans) to facilitate their rapid expansion.

Those funds provided to Wall Street were explicitly given in return for the Oligarchs' pledge to increase lending in the U.S. economy. The Oligarchs did the exact opposite -- greatly reducing their lending, and spending all the money on buying up other bank assets and increasing their reckless gambling -- with the derivatives market having roughly doubled in size since the Wall Street-induced financial crisis began.

So, the Oligarchs are much, much bigger. They have doubled their reckless gambling, and now the U.S. government is explicitly backing their private casino: the derivatives market. What this means is that in the next systemic crisis created by Oligarch-greed, the argument which will be advanced (by both Republicans and Democrats) is not that the Oligarchs have to be saved because they are "too big to fail." Even for the apathetic sheep of the American electorate, this would be too great an outrage.

No, in the future, unlimited and infinite funding of the banksters' gambling will be provided by the U.S. government because with the U.S. now "guaranteeing" an amount which exceeds 20 times global GDP, it is the solvency of the United States, itself which is now directly on the line in each and every future crisis created by these bankers.

Thus, the political "spin" which both halves of the two-party dictatorship will use to "justify" TARP II, TARP III, and TARP XX is that they must give the Oligarchs anything and everything they ask for to prevent the United States itself from being bankrupted from these future "crises" (i.e excessive Wall Street gambling). Obviously, if you ever intend to "cure" gambling-addicts, "guaranteeing" all their future gambling-debts is not the way to do it.

In short, the U.S. government has made itself into a direct subsidiary of Wall Street: one which shares in 0% of the profits, but backstops 100% of the risks and liabilities. And with each and every current and future scenario, it is the entire United States economy itself which is now being "leveraged" by the Oligarchs in their gambling.

There isn't the slightest mystery as to the goals of the Wall Street Oligarchs, and the ultra-rich aristocracy they represent. They want all the wealth, all the land, and all the power. Meanwhile, the American people do nothing but meekly submit: to being nothing more than serfs.

Having done nothing while the banksters' took all of their government's wealth (i.e. their own wealth), there are nothing more than a few, sporadic whimpers from the serfs as the banksters begin to steal all of their land. They had already taken all of the "power" in the U.S. many years before.

Had the U.S.'s "Founding Fathers" been able to see into the future, and see the herd of complacent, American sheep give away anything and everything they fought for, one can only assume that they would have laid down their arms and surrendered to the British -- since the "King George" who ruled Americans in the 1700's was a much more benign ruler than the "King George" and "King Barack" of the 21st century.