Can The Bush Tax Cuts Reduce The Deficit?

Economist Mark Thoma says the argument that the Bush tax cuts will pay for themselves and decrease the deficit is a misrepresentation of reality. He cites that the Bush tax cuts reduced revenue $1.7 trillion from 2001 through 2008, and will cost an additional $680 billion over the next decade if extended to high earners. See the following post from Economist's View. 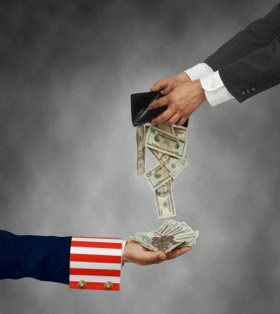 Some Republican Senate candidates have suggested that extending the Bush tax cuts — which are scheduled to expire at the end of the year — will actually be good for the country’s bottom line, as the economic growth that results will more than offset the trillions of dollars in lost revenue. “By extending tax cuts you pay down the deficit, you grow the economy by giving people more money,” said Colorado Republican Ken Buck.

But, of course, the Bush tax cuts did not even come close to paying for themselves. The Bush tax cuts cost us around $1.7 trillion in revenue from 2001 through 2008, in part because of weak output and job growth following the cuts (contrary to assertions about how the tax cuts would stimulate economic growth).

As for the cost of extending the tax cuts to the wealthy, the Tax Policy Center estimates that making all the Bush tax cuts permanent, as opposed to extending them only for the middle and lower classes, would cost $680 billion over the next decade.

The disappointing part is that the press still lets them get away with this. At best, the press generally says something like "some economists claim this isn't true," implying there's a debate about this issue -- that some credible economists think the tax cuts will, in fact, pay for themselves -- when there is no debate and the answer is clear. Tax cuts don't pay for themselves.

If the press won't call them on this obvious falsehood, how can we trust them on anything? Instead of reflecting poorly on the press, this ought to bring the general credibility of the people making these claims into question. The press ought to ask something like, "Are you this ignorant about economics, in which case why should anyone vote for you, or are you deliberately misleading people? I'll assume you aren't ignorant, so here's the question. If you are willing to make false claims about the revenue generated from tax cuts in order to promote them for the wealthy, what other falsehoods will you be willing to promote in order to serve political ends? If voters can't trust you to tell the truth about tax cuts, how can they trust you on anything?"