Is Silver Building Up To A Bull Run?

Silver has made a strong comeback, with prices doubling since late 2008. Although silver can be highly volatile, Moses Kim discusses why he thinks it will pay off to hold onto your silver investment as it has the potential to make a strong run. See the following post from Expected Returns.

The precious metals cognoscenti have been patiently waiting for a breakout in silver since it peaked at $20.79 in early 2008. Since then, silver has lagged gold by a wide margin. In late 2008, silver got absolutely hammered, and investor sentiment was just about as dire as I've seen in any market. It has admittedly taken a lot of patience to ride this prolonged period of consolidation, but now my patience is starting to pay off.

Most people can't take the volatility in silver, which is understandable. There are basically two components to successful investing. First of all, you have to be willing to take a 50% hit on your investments and not only hold, but have the nerve to buy. I'd say about half of the population doesn't have the stomach and emotional control to do this. Most investors flee in fear when their investments go against them when they should be celebrating that they can buy at a discount. If stocks were any other consumer item, they would be waiting on lines around the block to buy. But for some reason, people don't buy when stocks are selling at a discount. Very strange.

The other half of investing entails a proper analysis of fundamentals. This just about wipes out the other half of the population. If you can master these 2 aspects of investing, emotional control and fundamental analysis, you will do very well. The worst of the emotional aspect of investing in silver is behind us. Now silver investors should focus on maximizing their gains on this next leg up. Again, this is a lot harder than you think. Most of you will sell between $20-$25. Most likely, I'll be holding. Like I said, I'm in this for the big gains. I will continue to hold as long as the fundamentals justify me doing so.

Allow me to offer you a brief example of holding on for the big gains. John Paulson had a very simple chart to justify his short on housing: The inflation-adjusted price of homes in America over the last century. When Paulson's CDS bets against housing started paying off in a big way, his colleagues pleaded with him to take profits. But Paulson simply pointed to the charts, which suggested more pain in housing was ahead, and trusted his analysis. In the end, holding onto his bets was the right play, and Paulson ended up with the biggest windfall in Wall Street history.

I am doing the same. Every time I feel like selling, I just look at a picture of Helicopter Ben. It's hard to explain, but my conviction rises every time he opens his mouth. I am positive more dollar destruction is ahead. I am positive more quantitative easing is ahead. And to top it off, I know that the most dramatic rises in bull markets come at the tail end.

There has been massive accumulation in silver on weakness over the past year. If you study the charts, you'll notice pullbacks are very shallow. This, my friends, is very bullish. I expect to see a major battle at right about the level we are at now ($20.80). If we break above $21, I believe you will see $21.50 and $22 in a heartbeat. Silver shares should rise a good 10-15% if this occurs. 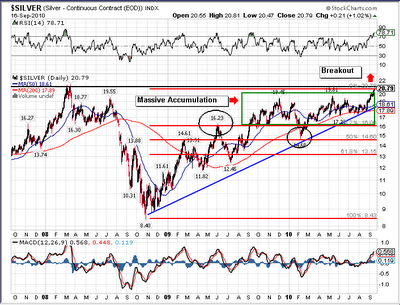 If you are an investor in the gold and silver space, you couldn't care less what happens in the general stock market. One of the major fallacies amongst gold and silver bulls is that precious metals stocks will collapse if the stock market does. Personally, I don't think so. The expectation of a major crash in the stock market has been one of the reasons many gold bulls have missed out on making at least 50% on their money over the past year. Don't make this mistake.

During the flash crash in February, and subsequent bouts of volatility, precious metals shares demonstrated resilience. Forget all the day to day movements- capital is starting to flow into gold and silver. Don't be left behind. I believe the next move up in gold and silver will be the most dramatic we've seen to this point.

As I've mentioned ad infinitum, Prechterites and deflationists will soon be extinct. It was just a couple of months ago that I posted a video of Prechter predicting the downfall of gold for the 100th time. Back then, I told all of you that this video would serve as a contrarian indicator. You are now starting to see why. This monster push in gold and silver is blindsiding most analysts. There are drivers to the precious metals market that most analysts just do not understand. I will continue to capitalize on this ignorance while showing you all a different way to view markets.

This is just starting to get fun. Sit back and relax: We are in the middle of a monster explosion higher in gold and silver that won't conclude until the masses wake up and smell the roses.

This post has been republished from Moses Kim's blog, Expected Returns.
Posted by: NuWire Investor @ 5:43 AM