Should We Still Listen To Alan Greenspan?

Jeff Nielson, writing in The Street, discusses Alan Greenspan's role in the recent economic crisis and questions whether his comments should be considered credible. Has Greenspan lost touch with economic realities as he argues that a rising stock market is the best stimulus for the economy? See the following post from The Street.

Life is very good -- if you're Alan Greenspan. He w 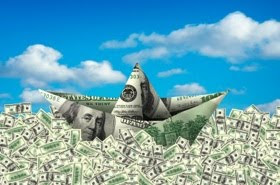 as the architect of the U.S. dot-com bubble, and clearly laid the foundation for the subsequent U.S. housing bubble. These two, enormous asset-bubbles made a lot of bankers obscenely wealthy, while laying waste to the U.S. economy.

Despite this ignominy, Greenspan is able to flit from one highly paid speaking engagement to another, like some kind of Teflon butterfly. Since he invariably shows up only at venues filled with sympathetic audiences, he rarely has to face a single hard question -- let alone any hint of hostility.

In a recent Greenspan appearance on NBC's Meet the Press, the stench of hypocrisy and revisionism emanating from Greenspan was positively nauseating. Greenspan began by posing as a born-again, fiscal conservative. Meanwhile, back in the real world, Federal Reserve Chairman Greenspan was the originator of near-zero interest rates -- rates lower than anything seen in the history of our modern economy.

The reason that our societies have never seen such reckless interest rates at any time prior to this is because it is absolutely inevitable that excessively low interest rates cause debt-levels to soar exponentially, along with inflation/asset prices -- and these factors inevitably lead to destructive asset bubbles. Given that Greenspan's interest rates were (at the time) the most reckless in history, it is no surprise at all that they led to the largest asset-bubbles in history, despite all the experts who claimed to be "surprised" by the inevitable (including Greenspan, himself).

Compounding this monetary madness was the fiscal suicide of the Bush regime, which gifted the wealthiest Americans with the largest tax-cuts (for the wealthy) in the history of any major economy. Given that the U.S. economy was incapable of running a balanced budget prior to the tax cuts, they had the effect of creating a massive, structural deficit in the U.S. economy.

Ever the servant of the wealthy while he ran the Federal Reserve, Greenspan never had a single word of criticism about this insane, multi-trillion dollar present for ultra-wealthy Americans -- who were already taxed at a far lower rate than in any other Western economy before the Bush tax-cuts. Now, (after the damage is done) we hear Greenspan spouting lines like:

More specifically, it follows the classic Greenspan pattern: lie in the present, then (after events have totally refuted the initial deceptions) he simply states the obvious, in hindsight -- and then pretends that he never held views contrary to this. The quote above clearly illustrates this.

Proving that he is still engaging in this pattern of lies-and-revisionism, we need only refer to Greenspan's remarks on the current condition of the U.S. housing sector.

"Home prices, as best we can judge, have really flattened out in the last year. And while it is true that most economists expect a small dip from here, largely as a consequence of the ending of the tax credit, the data don't show that at this particular stage. If home prices stay stable, then I think we will skirt the worst of the housing problem."

Regular readers will immediately reject this statement as utter nonsense. As I stated (and demonstrated) in The Second Bubble Bursts , not only have new home sales fallen off a cliff, but all of the U.S. housing data has turned negative. However, far beyond that, it has been common knowledge that ever since the U.S. financial crime syndicate wrote up trillions of dollars worth of "liar's loans" that there would be a serious crash in the housing sector, when hundreds of billions in option-ARM mortgages reset -- with the biggest spike in those resets beginning in the spring of 2010.

Unless we are to conclude that Greenspan is simply senile, and no longer capable of retaining data, he knows this, and has known it for years. His ridiculous posturing about "crossing our fingers and hoping for the best" lacks even an iota of sincerity, since he not only knows the next crash is inevitable -- but that it has already begun.

Even though Greenspan no longer receives any (official) paychecks from the U.S. financial crime syndicate, he still feels compelled to defend them -- with feigned naivety which will disgust most readers.

"I've been in and out of Wall Street since 1949, and I've never seen this type of animosity between government and Wall Street. And I'm not sure where it comes from...?"

Are we to believe that Greenspan has forgotten how Wall Street lied and betrayed the American people, when they took the $10 trillion promising to "increase lending" to the American people, and U.S. small businesses -- but then simply hoarded every penny to themselves? Are we to believe that Greenspan is so far out of touch with the real world that he doesn't know that Wall Street has used these scams to take the homes of millions of Americans, through foreclosure?

If there is any doubt that Greenspan's intellectual bankruptcy is equaled, if not surpassed by his moral bankruptcy, then the following quote should alleviate that.

"I don't know where the stock market is going, but I will say this, that if it continues higher, this will do more to stimulate the economy than anything we've talked about today or anything anybody else was talking about."

Again, unless we assume that Greenspan has been incapacitated by senility, we must presume he knows that more than 55% of all U.S. equities are held by 1% of the U.S. population. While the top 20% hold close to 90% of all stock. If you're one of "the little people" (i.e. 80% of all Americans), then in Alan Greenspan's world, you don't count.

More than 200 years ago (shortly before she lost her head to a guillotine), Marie Antoinette's response to the plight of vast numbers of starving, French peasants was "let them eat cake." Today, we have our own 21st century "Marie Antoinette": Alan Greenspan. His response to the plight of tens of millions of Americans who have been devastated through losing their homes and/or jobs -- and who now live in poverty?

The primary difference between Marie Antoinette and Alan Greenspan was that Ms. Antoinette was not directly responsible for the plight of French peasants -- but was merely one of the "bourgeoisie" who benefited from their oppression. Conversely, there is arguably no other person on the planet who has done more to produce the economic misery being experienced by most Americans than Sir Alan Greenspan.

Proving that justice is at least as elusive today as it was 200 years ago, Greenspan continues to be rewarded for his misdeeds, instead of being "shortened" by about a foot. It's enough to even make most atheists hope that there is some higher power out there -- so that someday, someone will pass judgment on one of history's worst charlatans.

This post by Jeff Nielson has been republished from The Street, an investment news and analysis site.
Posted by: NuWire Investor @ 5:58 AM