Market Does Not Have Typical Response To Fed Announcement

John Rubino discusses the flaws of the monetary system that he says will require ever-larger stimulus programs to keep it afloat. The market did not have a typical response to an announcement of more quantitative easing, as investors may be waiting for additional stimulus. See the following post from Dollar Collapse. 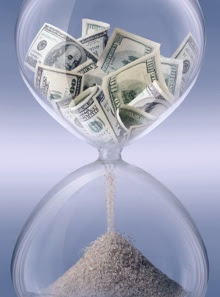 This isn’t how it normally goes.

For the past couple of decades — that is, during the parabolic phase of the global credit bubble — the financial markets have responded to US Fed announcements of easier money like kids whose daddy has promised them a trip to Disneyland. The euphoria doesn’t always last, but the initial reaction is usually a credulous round of applause and reflexive buying of risk assets. Go back through the 2008-2009 bear market and you’ll see that even when the world seemed to be falling apart, a Bernanke speech or a discount rate cut was good for a quick pop in stock prices.

Which makes the past couple of days remarkable. The Fed promises more quantitative easing — this time via increased buying of US Treasuries — and instead of popping, the markets finish the day lower and open the following day down hard.

Could investors have finally figured out that they’re being played by the world’s monetary authorities, and that our growing mountain of debt makes a painless fix impossible? Maybe, but I’ll go out on a limb and say no. The problem with this latest stimulus program is that it isn’t seen as big enough to offset the slowdown that makes it necessary. The market is just waiting for the main course.

The scam that is fiat currency will continue as long as those currencies are in demand. While the US, Europe, and Japan can still borrow money, they’ll continue to do so, and continue to announce ever-larger stimulus programs aimed at counteracting the mass liquidation of private debt.

So there’s more coming. Much more. As the blog Pragmatic Capitalist explains, the “helicopter money” phase of hasn’t even started.

There is perhaps, no greater misunderstanding in the investment world today than the topic of quantitative easing. After all, it sounds so fancy, strange and complex. But in reality, it is quite a simple operation. JJ Lando, a bond trader at Goldman Sachs, has eloquently described QE:

“In QE, aside from its usual record keeping activities, the Fed converts overnight reserves into treasuries, forcing the private sector out of its savings and into cash. This is just a large-scale version of the coupon-passes it needed to do all along. Again, they force people out of treasuries and into cash and reserves.”

Some investors prefer to call it “money printing” or “stimulative monetary policy”. Both are misleading and the latter is particularly misleading in the current market environment. First of all, the Fed doesn’t actually “print” anything when it initiates its QE policy. The Fed simply electronically swaps an asset with the private sector. In most cases it swaps deposits with an interest bearing asset. They’re not “printing money” or dropping money from helicopters as many economists and pundits would have you believe. It is merely an asset swap.

Next year’s stimulus plan will feature a panicked federal government buying assets outright, for above-market prices, with newly created dollars. That’s when we find out just how gullible the financial markets really are.

This post has been republished from John Rubino's blog, Dollar Collapse.
Posted by: NuWire Investor @ 5:50 AM