The US office vacancy rate is the highest since 1993 suggesting that businesses are not confident enough to expand. The high vacancy rate has led to lower rents which can lead to lower valuations and rising defaults. See the following post from Expected Returns. 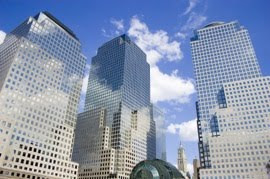 Vacant office space continued to accumulate in the second quarter, the latest indication that businesses aren't planning significant hiring in the near future.

Office buildings across the U.S. lost 1.8 million square feet of occupied space in the quarter, pushing the national office vacancy rate to 17.4%, the highest level since 1993, according to New York-based research firm Reis Inc.

While the drop in occupied space was much smaller than in previous quarters, analysts said companies' continued reduction of office space meant they still lacked confidence in economic recovery.

The center of the stalling economic recovery is real estate, both commercial and residential. Office vacancies have risen to 17.4% from 16% last year, which reflects persistently weak business conditions. Private businesses are simply not expanding.

Job growth and office-space use are closely intertwined. While some major users of offices, such as federal regulatory agencies, have been expanding, big banks and corporations have lagged behind in increasing their real-estate footprint, according to some analysts. That is a sign that these larger companies have been slow to return to their pre-recession staffing levels, a contributing factor to the persistently high U.S. unemployment rate.

The weakness in occupancy rates is corroborated by disappointing job reports. The data confirms we are seeing a disconnect between private and public economic activity. A continued expansion in the public sector is the worst possible trend for our economy longer term.

The weak economic environment has driven down rents, with effective rents down 5.7% year-over-year. Falling rents lead to falling commercial real estate valuations and rising defaults. Commercial real estate defaults are already up from 2009, and if this current downturn intensifies, the losses for smaller local banks will be staggering. Is it any wonder FDIC's list of problem banks keeps expanding?