US Debt Burden Can Only Be Resolved Through Inflation

Moses Kim writes that the deflationists' argument is flawed because it asserts that the dollar will rise in value despite being the largest debtor nation in history. He believes that the enormous debt burden can not be resolved through growth, but only through inflation. See the following post from Expected Returns.

Our leaders have painted us into a corner and we are at the precipice of yet another financial crisis. The ubiquity of braindead economic thinking at the highest level precludes meaningful action from taking place. While our leaders believe we can increase our debt burden and grow our way out of this, it's hard for me to imagine such a prosaic resolution to this debt crisis.

With our goverment handling its finances in a Greek-like manner, confidence is evaporating, adding another variable to an already complicated picture. Developments in the Euro prove how quickly currencies can collapse once confidence start slipping.

Europe may be mired in a debt crisis, but guess what, so are we. Our debt burden has risen at both the state and federal level as tax receipts fall- which suggests the economic recovery is a figment of our government's imagination. 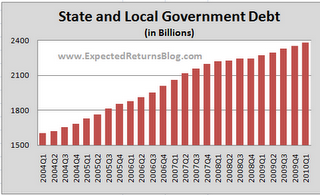 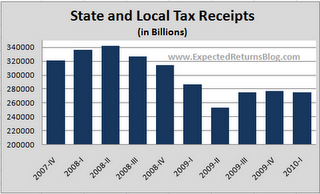 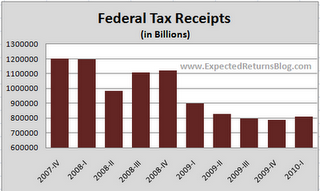 The sustained weakness in the economy in the face of massive stimulus reflects the declining marginal utility of debt. To wit, we are pushing on a string.

Deflationary arguments seem to be gaining resonance, especially in the Great Depression II crowd, since people tend to conflate Depressions with deflation. However, we must take into account the differences in monetary systems before jumping to conclusions about a potential deflationary collapse.

The U.S. government's ability to devalue via the printing press was constrained under the gold standard of the 1930's. As the dollar came under speculative attack in 1931, the U.S. raised interest rates to preserve the value of the dollar, and thereby maintain the viability of the gold standard. Rising interest rates were deflationary for an economy already in tatters.

In a floating exchange rate system, currencies can simply float to a "fair" price level. Currencies under speculative attack will simply devalue, and this is inherently inflationary. Governments can, of course, accelerate the debasement process by cranking up the printing press. Bottom line: it is far easier for governments to inflate today.

Anyway, we are seeing positive year-over-year CPI prints, so deflationary fears are a little overblown at this point. 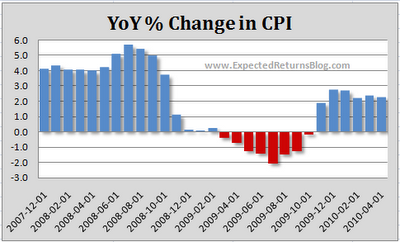 Deflationists point to the deflationary side effects of debt destruction. But debt defaults contract money supply indirectly, and only to the extent that banks withhold funds to fulfill capital reserve requirements. While this does keep a temporary lid on inflation, accumulating excess reserves are an inflationary accident waiting to happen. Furthermore, the Fed can always step in with a zero interest rate policy and help banks repair balance sheets. Yes debt implodes, but the Fed can restart the debt cycle at the push of a button. 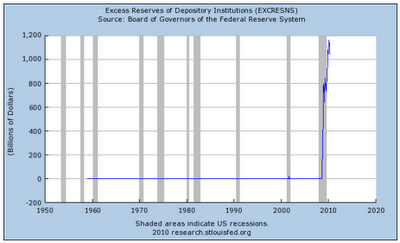 This debt crisis will be resolved through inflation. The flaws in the deflationary argument are numerous, but at the very core, deflationists are implying that the dollar will rise in value. This is positively nuts since we are the greatest debtor nation the world has ever seen. And I don't care how well the dollar does versus other flawed fiat currencies; I am only concerned with its value relative to goods and services.

In all likelihood, we will see the reinstatement of stimulus efforts, such as homebuyer tax credits, which will put renewed pressure on the dollar. Each round of newly issued debt pushes us closer to the tipping point when the dollar and bonds falter. Timing is the only question here. Investors will be wise to wait out the storm in gold.