The housing market remains is a weak state that appears to be getting worse following the end of the homebuyers tax credit. With new home sales falling to historic lows, there is little support for optimism. See the following post from The Mess That Greenspan Made.

It’s hard to believe that, after continuing clear evidence of an extraordinarily weak housing market that only improves temporarily when the government applies cardiac defibrillator paddles, some are still optimistic. The fact that consensus estimates were so far off the mark this week – by almost 10 percent for existing home sales and by a whopping 30 percent for new home sales – is a good indication of how wrong “the consensus” has been.

The latest slant on the data, uttered by Franklin Templeton’s Michael Materasso in this Bloomberg interview, is that if you average the data, somehow, things aren’t as bad as they seem. I don’t know, does this look any better to you? 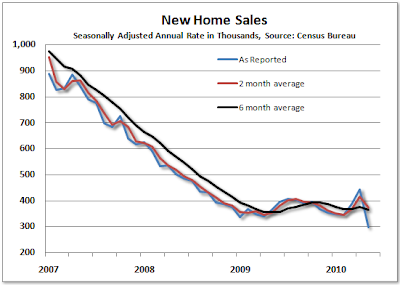 However you look at it, new home sales aren’t improving from levels that – for more than two years now – have been below the pre-2008 low and that’s before adjusting for the growth in population. Prior to the housing boom going bust, the worst single month homebuilders saw was an annual sales rate of 400,000 in January of 1991 – that’s better than what we’ve had since late-2008 and today’s population is about 25 percent higher.