Is The Country Losing Confidence In Government's Management Of The Economy?

Only one-third of Americans surveyed by a Wall Street Journal/NBC News poll believe that the economy will improve over the next year, a sign of a growing loss of confidence in the government's ability to help the economy. The primary beneficiary of a trend in declining confidence is gold which some think is headed for a bull run. See the following post from Expected Returns.

There comes a point in time when reality 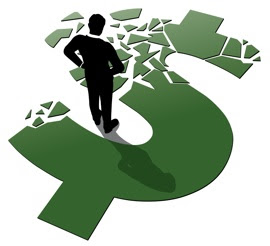 sets in en masse and people awaken from their self-imposed slumber. The ongoing destruction in our economy is not something people want to believe, but it is something people regrettably have to face. President Obama too was granted the benefit of the doubt until it became impossible for even his most ardent supporters to defend his actions. There is clearly a collapse in confidence underway in America- one that I have been expecting for quite some time. The result of collapsing confidence will be new record highs in gold that will blow away mainstream projections. From the WSJ, Confidence Waning in Obama, U.S. Outlook:

Americans are more pessimistic about the state of the country and less confident in President Barack Obama's leadership than at any point since Mr. Obama entered the White House, according to a new Wall Street Journal/NBC News poll.

The survey also shows grave and growing concerns about the Gulf oil spill, with overwhelming majorities of adults favoring stronger regulation of the oil industry and believing that the spill will affect the nation's economy and environment.

Sixty-two percent of adults in the survey feel the country is on the wrong track, the highest level since before the 2008 election. Just one-third think the economy will get better over the next year, a 7-point drop from a month ago and the low point of Mr. Obama's tenure.

Confidence is currently in a trough, which reflects the mass realization that the "green shoots" economic recovery was a sham. Of course this was obvious last year, but the reality the data were projecting was lost in a sea of media overexuberance and emotionally-charged economic reporting. Invest with too much emotion and watch your capital disappear.

The prime beneficiary of this irreversible trend is gold. Gold is consolidating for a move that will be so monsterish that mainstream reporters will be at a loss to explain it. They will look at CPI data that shows negative month over month prints and assume the gold market is overheated. They are stuck in one mode of thought and cannot reframe their beliefs to align with reality. This is why they will continue to be befuddled by gold's upward thrust.

The market is always relaying messages that are decipherable if you step back and open your eyes. Last year gold prices were making record highs at the same time everyone was jumping on the economic recovery bandwagon. Something was wrong: either the opinion of economists or the market. Guess what? It wasn't the market. With record low new home sales, falling stock prices, and persistently high unemployment, the economic recovery thesis is now as believable as the Easter Bunny.

The time to prepare for what is coming is now. Most people, of course, love inertia. It is only when gold is trading hundreds of dollars from today's levels that people will open their eyes. This suits me just fine. I have been adding aggressively since February in anticipation of a move that will leave little doubt in people's minds about the strength of this bull market.

This post has been republished from Moses Kim's blog, Expected Returns.
Posted by: NuWire Investor @ 5:59 AM