Key Predictors Of Inflation Or Deflation

While inflationists and deflationists can support their arguments with select data about money supply and interest rates, the most important factor to watch, according to Moses Kim, is the dollar exchange rate. A loss in confidence in a currency can happen very quickly, as the Euro has demonstrated, and this can lead to rapid inflation. See the following post from Expected Returns.

The inflation vs deflation debate is one fraught with biases, misnomers, and rigid positions. What I've noticed is that both inflationists and deflationists selectively handpick data to support their respective positions. This is fine and dandy if your goal is to win an argument; but if you want to win as an investor, you must unemotionally in 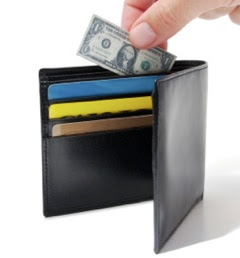 If I had to, I could make a convincing argument in either direction since we are seeing both inflationary and deflationary forces. I don't believe there is much debate on this point. However, the successful investor doesn't tell you what is happening right now. The successful investor is constantly trying to foresee future events using a Bayesian approach to investing, incorporating data on an ongoing basis to adjust forecasts if necessary.

At the very core of the inflation vs deflation debate are interest rates. Unfortunately, most people misunderstand the relationship between interest rates and inflation. 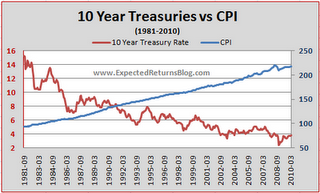 Deflationists will tell you low interest rates not only evidence deflation, but muted inflation expectations. To support their argument, they will show you a positively correlated chart like this: 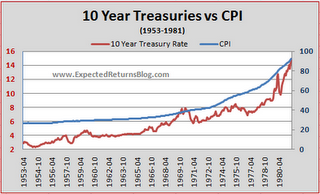 As you can see, both deflationists and inflationist can point to statistically and historically valid data to support their respective arguments. Unfortunately, both sides are guilty of showing just a snippet of the overall picture. The inflation vs deflation debate is far more complex and goes well beyond just interest rates.

Let me preface the following statement by saying I lean heavily towards the Austrian camp. However, there isn't a strong correlation between money supply and inflation in the short-term. This is key to understanding why a hyperinflationary collapse didn't materialize last year when money supply went through the roof.

In the early stages of inflation, money supply often outpaces inflation by many multiples. This was the situation in the Weimar Republic before their hyperinflationary collapse. The following charts taken from Constantino Bresciani-Turronis seminal text about the Weimar hyperinflation, "The Economics of Inflation", makes this relationship clear. 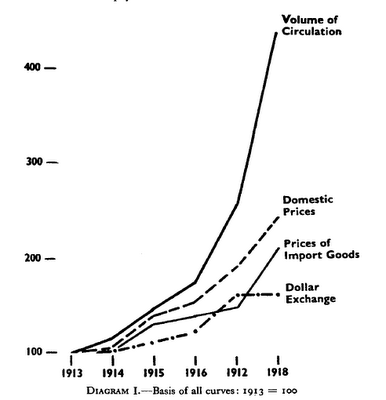 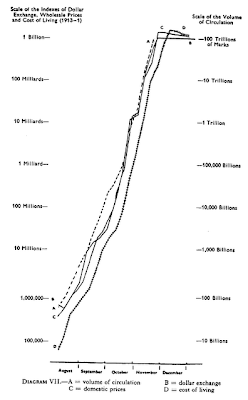 In 2009, Ben Bernanke cranked up the printing presses and the money supply expanded at an unprecedented clip, yet there was no hyperinflation. Inflationary forces were certainly concentrated in certain sectors, such as stocks, but on a broad scale, inflation was muted. 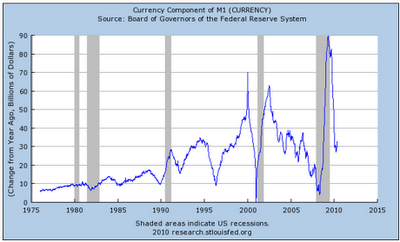 Recently the trend in money supply has reversed. According to John Williams at shadowstats.com, M3 is contracting at the fastest rate on record. This is an apparent victory for the deflationists, right?

I believe the number one driving force of inflation moving forward will be the dollar exchange rate; and I believe the the loss of confidence in the monetary system as currently structured will lead the dollar down. History shows that the truly monster currency moves are driven by public confidence.

Remember, it was only a year ago that the Euro was the safe haven currency of choice for investors. The recent collapse in the Euro is correctly blamed on the debt crisis in the PIIG nations. However, the debt problems in the Eurozone were well known for years. The only thing that changed was perception.

Perception is the only thing propping up the U.S. dollar. Europeans thought they could waddle through their debt problems unscathed until, well, they couldn't. Americans are similarly inflicted with the head-in-the-sand disease that ignores large-scale funding problems similar to those seen in Greece. The dollar will continue to profit from safe haven capital flows until, well, it doesn't.

Swings in the dollar, and by extension inflation, will be sudden and dramatic, mirroring the confidence of investors. It will therefore benefit people in both the inflation and deflation camps to rethink their respective false assumptions. The fundamentals for dollar weakness have been in place for some time; it is now time for the market to recognize it.