Dan Freed discusses whether the latest news of bank investigations was leaked by the Obama administration to move financial reform forward. Several major banks may be investigated for passing misleading or false information to get favorable ratings for their securities. See the following post from The Street. 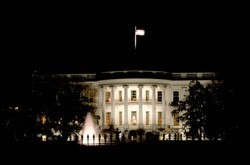 For those innocents who think it is just a coincidence that The Wall Street Journal has once again topped its front page with stories about criminal investigations of Wall Street banks, allow me to inject a dose of reality into that cream-filled donut you are about to swallow.

Sweeping regulatory reform is making its way through Congress, and the Obama administration has clearly decided that leaking news about investigations of Wall Street banks is the way to get the legislation it wants.

Rochdale Securities analyst Dick Bove, a veteran who has seen a few Wall Street crackdowns in his day, argues that the fact that the Securities and Exchange Commission is working together with the U.S. Justice Department on the investigation suggests the hand of the Obama administration is behind it.

"The President has demonstrated with the health care bill that he doesn't back off until gets what he's attempting to achieve," Bove says. "With the financial regulation bill he's showing the same level of tenacity. We're getting almost a programmed set of announcements every couple of days concerning something that was done wrong on Wall Street."

Bove made these comments to me Wednesday, following Journal's report that Morgan Stanley(MS) had joined Goldman Sachs(GS) as reportedly being the subject of a criminal inquiry into its disclosures regarding collateralized debt obligations it helped create.

The analyst looked especially smart when I opened the same newspaper Thursday to read that JPMorgan Chase(JPM), Citigroup(C), Deutsche Bank (DB) and UBS(UBS) are also reportedly being investigated.

The New York Times, meanwhile, despite the fact that its owners and editors appear far more sympathetic to the idea of a Wall Street crackdown than those at The Wall Street Journal, has to settle for a leak from New York Attorney General Andrew Cuomo for its page. Cuomo, the newspaper reports, is looking into whether banks passed false or misleading information to bond ratings agencies to get higher ratings for securities they created.

If I were Obama, I'd leak to the Journal too. He knows the Times will bash Wall Street on its own, while the Journal has regularly demonstrated its willingness to go after Congress instead, with articles detailing questionable expenses, or short selling by elected officials. Give them a few leaks, and they may lay off those stories a bit, or feature them somewhat less prominently.

Still, clever public relations strategies can easily backfire. Wall Street can only hope this one will.

This post has been republished from The Street, an investment news and analysis site.
Posted by: NuWire Investor @ 5:57 AM