Moses Kim from Expected Returns compares the national debt levels in US and Greece to make the case that a US debt default is highly probable. In addition to similarities in deficit to GDP ratio, the US politicians are promising citizens benefits that they won't always be able to provide. See the following post from Expected Returns.

The bemused indifference surrounding a potential U.S. debt crisis is amazing in light of our similarities to Greece. But I shouldn't be surprised since people behave the same way leading up to any major crisis: hubris is followed by denial, which is then followed by all-out panic. We are currently in the "denial" stage. I am not trying to be hyperbolic here, but a debt default in America is a high probability event.

To corroborate my statement, I have plotted key Greek debt ratios from 2009 against projected U.S. debt ratios for 2010. Now concentrate for a second. See any similarities? 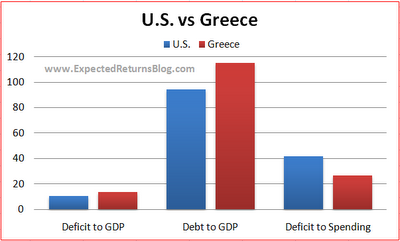 We are no different from Greece in making social promises we cannot keep. Social Security and Medicare have to be slashed significantly one way or the other, either by decree or via inflation. The political will to make drastic cuts to these programs just doesn't exist. Inflation is coming since it is the easy way out for politicians. Never-ending monetization will assure this.

Trillion dollar deficits are here to stay since States will need to be bailed out en masse. California recently announced a $19.1 billion dollar budget shortfall and will need federal aid soon. So will Illinois since they are going the "head-in-the-sand" route of simply not paying their bills. Utterly amazing.

I am quite certain the U.S. dollar will eventually come under intense pressure from shorts. We have reached the point of no return and you can thank our politicians for leading us off the cliff. Gold will be the only asset to come out of this coming crisis unscathed. If you think gold is overvalued at these levels, you clearly are underpricing potential risks. I hate to be so dire, but the evidence is starting to mount that this will get pretty nasty. We are simply not seeing the type of leadership we need to prevent this coming debt crisis.

Email ThisBlogThis!Share to TwitterShare to FacebookShare to Pinterest
Labels: US dollar