quasi-employment status as the recently unemployed searches for new full-time work, but the latest labor report shows a significant number of people going from being employed to not wanting a job. Some experts believe this is due to more people retiring now that the U.S. is climbing out of the recession, but others are more skeptical and think that it may be the sign of more bad news to come in the jobs market and for the economy as a whole. For more on this continue reading the following article from Iacono Research.


Friday’s August labor report (as detailed here last week) has spawned some interesting discussion about the possible cause of the 30-year low in the labor force participation rate, stemming from the household survey’s odd collection of data in which totals for all three of these groups fell – employed, unemployed, marginally attached workers (those still wanting to work but who have given up looking).

Usually, the newly jobless go from being employed to unemployed and then, sometime later, to marginally attached (and out of the labor force), but, last month an unusually large number went directly from having a job to not wanting one. This is depicted below via this item at macroblog and this offering from the Wall Street Journal economics blog also discusses the subject. 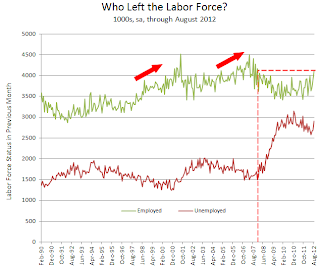 Retirees are probably the biggest factor in this surge and it makes sense that a large number of individuals delayed retirement in recent years due to the financial crisis and are now packing up office boxes and picking up their last paycheck. Others are no doubt going back to school or quitting work to raise a family, but, perhaps the most curious thing about this recent change is that the last time it occurred was just when the 2008 recession was starting back in late-2007.

Is this s a good sign or a bad one?

Well, it might be good and it might be bad because, as indicated by the red arrows above, previous surges in the number of people moving from employed to out of the labor force have come when times were good with a peak occurring when recessions began. This likely means that people are comfortable enough today to pack it in, but, more importantly, that a new recession may not be far off.

This article was republished with permission from Tim Iacono.
Posted by: Eric Ames @ 6:58 AM