The economy is “muddling along” according market observers, and experts say this state of affairs is not enough to force the Federal Reserve to initiate yet another round of quantitative easing in September. The latest Federal Open Market Committee meeting minutes indicate the Fed is closer to action, but more critics are starting to believe that action is going to be muted. Many think a prediction can be found by looking at what way centrists are leaning because it could go either, especially considering the persistent high rate of unemployment. For more on this continue reading the following article from Economist’s View.


Chances of QE3 Diminishing, by Tim Duy: I have made the case that neither the doves nor the hawks that are important for the course of monetary policy. It is the center that is the key, and that center needs to be pulled in one direction or the other by Federal Reserve Chairman Ben Bernanke. If the 2Q12 slowdown proved to be temporary, I doubt Bernanke is inclined to pursue more QE in the absence of clear financial market disruption. And with that in mind, although economic performance continues to be no better than lackluster, recent data has dispelled the worst fears that we are heading into recession. This combined with stable financial markets argues against additional easing in September.
If the center is the key, we need to see where the center is moving. This should provide some insight into Bernanke's leanings as well. On July 13, Atlanta Federal Reserve President Dennis Lockhart said:


So, as one policymaker, here's my situation: my support for the current stance of policy rests on a forecast that sees a step-up of output and employment growth by year-end and into 2013. If the economy continues on the track indicated by the most recent incoming data and information, that forecast will become untenable, as will the policy premises underlying it. So, as I said at the outset, this is a challenging juncture for policymaking.


The data since that time has shifted Lockhart's views, with likely no small part of that change due to the employment report. Today:


As of July, there are more than 4½ million fewer payroll jobs than in November of 2007. Most of these job losses were in the private sector. The share of unemployed workers who have been out of a job for more than 27 weeks has fluctuated between 40 and 50 percent over the entire course of the recovery.
I think this condition can be attributed, at least in part, to fundamental imbalances that have not yet been corrected, a situation that presents formidable challenges for monetary policymakers. There is a risk to monetary policy being employed too aggressively and without effect to address economic problems that can be resolved only by fiscal reforms that involve making tough choices about the allocation of public resources. Monetary policy can exert a powerful positive influence on an economy, but as Chairman Bernanke has pointed out, monetary policy is not a panacea.


It is not that Lockhart believes the economy is surging forward. It is muddling along. But muddling along at a rate that does not justify additional easing. Nor is it clear that such easing would be effective as the remaining problems are beyond the scope of monetary policy. The logic appears to be that employed by Bernanke - the benefits of addition easing at this point do not exceed the risks. And while for the hawks those risks are inflation, for the middle ground I suspect the risks are to the functioning of financial markets. And while we are on the topic of financial markets, from Bloomberg:


“Anytime you see the equity markets rise, I think what it tells you is there is more appetite for risk,” Lockhart told reporters after his speech. “And in the current context, I would interpret that to be some comment on more confidence that Europe will work through its problems without a major incident of some kind.”


Europe has stabilized, reducing one of the clear risks to the outlook. Perhaps I have been too hard on ECB President Mario Draghi. Of course, I thought the same thing after the two rounds of LTRO, and that didn't stick. Once bitten, twice shy. But that can wait for a later post. The upshot is that equity markets have been on a nonstop trip higher:

We are not seeing a repeat of last summer's weakness that prompted Operation Twist. And while I don't have access to a Bloomberg terminal, Zero Hedge does, and noted this headline:

Back to the charts: 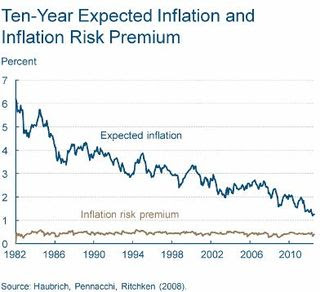 but that measure is not likely to weigh heavily in FOMC discussions. Policymakers are more likely to take their signals from financial markets.
The Reuters coverage of Lockhart's speech included this line:


Central bank officials gather in Jackson Hole, Wyoming, late next week for an annual conference on monetary policy. Many analysts believe Bernanke will use a speech there to lay out a third round of quantitative easing via bond buys, or QE3.


I find it very unlikely that Bernanke gives such direction on QE3. I think the current economic and financial environment bears little resemblance to the famous Jackson Hole speech of 2010. Given the change in the tenor of the data and the financial markets, it is hard for me to believe that his risk/benefit calculus is currently in favor of additional quantitative easing. I think he might take action if he could find another tool that he thought would be more effective than additional quantitative easing, but I don't see such a tool on the horizon. Maybe he will pull something out of his hat next week, but I doubt it.
Bottom Line: Closely following the doves would lead one to conclude that QE3 was imminent. This dovish chatter keeps the possibility of QE on the table. But really this has been the case for months. That should lead one to conclude that the bar to additional QE is high, very high. The middle, led by Bernanke, is just not pulling in that direction. Indeed, recent events seem to be pulling the middle away from additional QE. Assuming the FOMC holds steady in September, I think we will be able to measure the conviction of the doves by any dissents. If San Francisco Federal Reserve President, the most dovish voting FOMC member, does not dissent, he must not have a strong conviction that additional easing is necessary. And if the doves lack such conviction, why should we expect it from the middle ground?

This blog post was republished with permission from Economist's View.
Posted by: Eric Ames @ 8:05 AM