Fed Economists Laugh It Off

A new graph is making its way around the Internet that charts the amount of laughter recorded by Federal Open Market Committee (FOMC) stenographers during meetings between 2001 and 2006 – during the ramp-up to the recession. The graph shows that committee members had increasingly more fun as the years passed, and suggests they could have been doing more to keep an eye on the growing housing bubble that would soon burst. The FOMC is expected to announce a new initiative regarding interest-rate projections and future impact, and many are wondering how many will be laughing. For more on this continue reading the following article from Tim Iacono.

The Federal Reserve transcripts from 2006 released ten days ago continue to reverberate around the internet as the central bank has become a laughing stock for being so unaware of the U.S. housing bubble that was inflating to dangerous levels throughout the year.

Dean Baker’s Alan Greenspan’s ship of fools from last week is well worth reading if for no other reason than to learn what former Fed governor Frederic Mishkin was thinking late that year and I recently came across this item at The Daily Staghunt blog that charted how much laughter appeared in the transcripts over the years. 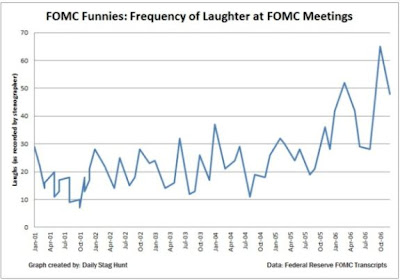 While Fed economists are purportedly a funny lot, it does look pretty bad to see increasing joviality at a time when they could have been doing something about the housing bubble.

The FOMC (Federal Open Market Committee) meets this week and they are expected to announce of a new communication initiative with two key features – expanded interest-rate projections and an explanation of their objectives for inflation and employment. Fed Chairman Ben Bernanke will surely discuss these in detail in the press conference after the meeting and, though normally keen on audience engagement, he’ll probably be hoping that he’s not asked about the 2006 transcripts.

If we’re really lucky, someone will ask him about this chart.