Unemployment and underemployment are down and payrolls are up, according to the latest report from the U.S. Department of Labor. Unemployment dropped .1% to 9.0% for the month; however, the number of unemployed hasn’t strayed more than two percentage points from this level in seven months. Despite improvement, the numbers are not as high as predicted and are still far too low considering population growth. While private-sector payrolls are up construction and government payrolls saw an overall decline, which does not bolster predictions of economic recovery. For more on this continue reading the following article from Tim Iacono.

The Labor Department reported that nonfarm payrolls increased by 80,000 in October after an upwardly revised gain of 104,000 in August and 158,000 in September as the jobless rate fell from 9.1 percent to 9.0 percent. 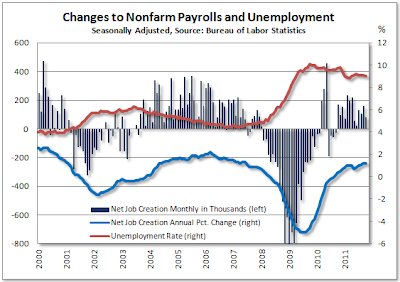 While the October payrolls gain came in slightly below consensus estimates, total upward revisions of 102,000 for the prior two months helped to offset this disappointment, however, the U.S. labor market continues to add jobs at a pace that is failing to keep up with the growth in the population, payroll gains averaging just 90,000 over the last six months and 123,000 so far this year.

The unemployment rate was little changed last month and has now stayed within a narrow range of between 9.0 percent and 9.2 percent for the last seven months. The number of unemployed persons fell from 14.0 million in September to 13.9 million in October while the number of long-term unemployed fell by 366,000 to 5.9 million, or 42.4 percent of total unemployment.

The broader U6 measure of underemployment (including discouraged workers and those settling for part-time work instead of full-time work) fell from 16.5 percent to 16.2 percent and the civilian labor force participation rate was steady at 64.2 percent.

Private sector payrolls increased by 104,000 in October paced by gains of 35,000 in trade, transportation, & utilities and 32,000 for professional & business services, almost half of which were new temporary positions. Education & health care services added 28,000 jobs and there were 22,000 new positions in leisure & hospitality. 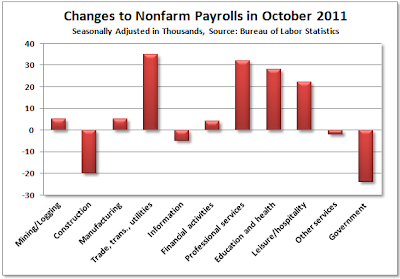 Some 20,000 fewer jobs at the state level paced an overall decline of 24,000 in government payrolls and a net reduction of 22,500 in nonresidential construction jobs drove the construction category sharply lower.

Overall, this report is consistent with the recent “slow growth” performance of the U.S. economy where economic activity is, basically, just keeping pace with population growth but nothing more.