Currency expert Kathy Lien revisits a time in 1979 when the U.S. missed a Treasury bill payment, pointing out that the value of the dollar only dropped 0.6% immediately following the lapse; however, the value plummeted less than one month after the one-time default. Lien notes that it would be a mistake to attribute the drop in value on the actual missed payment, but the real reasons were increased inflation and global concerns over the security of the U.S. dollar. For more on this continue reading the following article from Kathy Lien.

Although the U.S. government has never officially defaulted on its debt, it missed payments on some Treasury Bills in 1979. Then as now, Congress was playing a game of chicken with Republicans and Democrats bumping heads on raising the debt ceiling. The debt limit was a fraction of its current levels and at the time, the dollar only fell briefly. The 0.6 percent drop in the Dollar Index was so small that it was barely left an imprint. However less than a month later, double digit inflation and concerns about the outlook for the U.S. economy along with the security of the U.S. dollar drove the greenback sharply lower. It may be tempting to attribute this decline to the short term default on U.S. debt but the Treasury started making its T-bill payments again after a very short delay.

Here’s a chart of how the dollar behaved when the U.S. government missed its debt payment in 1979: 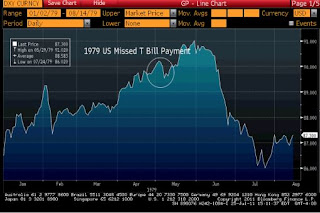 This blog post was republished with permission from Kathy Lien.

Investors hate uncertainty, so a default will likely cause stocks to plunge and since we have a global economy, this would include international stocks as well. They may or may not recover quickly.