A Glance at the U.S. Credit Rating Outlook Downgrade

Yesterday's S&P downgrade of the rating outlook for U.S. debt was outlined this morning in The Wall Street Journal. Read about what the analysts had to say in this full post from The Mess That Greenspan Made.

The Wall Street Journal provides a thorough examination of yesterday’s S&P downgrade of the rating outlook for U.S. debt in this story in today’s paper that includes the graphic below showing where we stand on our credit rating, outlook, and debt. As many analysts have noted over the last 24 hours, the warning would carry a lot more weight if the ratings firm hadn’t done such a poor job in assessing mortgage securities just a few years ago. 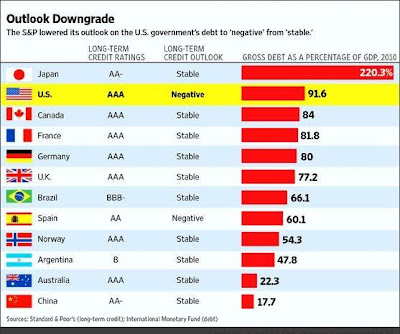 Officials in Japan voiced confidence in U.S. Treasuries, though the Chinese government has yet to offer an official reaction to the news, however, the head of their largest credit rating agency said the move was well deserved (according to this WSJ item, he said, “the U.S.’s actual debt repayment ability has already collapsed”). Yikes!

Meanwhile, American economists poo-pooed the whole idea of the U.S. losing its AAA credit rating, offering markets the assurance that it’s virtually impossible for America to default on its debt because said debt is denominated in dollars and we can print as many of those as we desire, a view that, sometime in the not-too-distant future may prove to be another example of how conventional wisdom is often wrong.