The entire notion of a traditional retirement is being discounted by 25% of Baby Boomer retirees, according to a recent story in the Associated Press. This is attributed to that population currently having little or no retirement savings and no faith that they ever will. Learn more about this in the full blog post from The Mess That Greenspan Made.

The outlook gets more grim in the latest survey of aspiring Baby Boomer retirees, a full 25 percent now discounting the entire notion of a conventional retirement, in no small part due to the fact that they have little or no retirement savings and don’t expect that situation to change anytime soon. Details are in this story at the Associated Press.

The 77 million-strong generation born between 1946 and 1964 has clung tenaciously to its youth. Now, boomers are getting nervous about retirement. Only 11 percent say they are strongly convinced they will be able to live in comfort.

A total of 55 percent said they were either somewhat or very certain they could retire with financial security. Yet a substantial 44 percent express little or no faith they’ll have enough money when their careers end.
…
Excluding their homes, 24 percent say they have no retirement savings. Those with nothing include about 4 in 10 who are non-white, are unmarried or didn’t finish college. 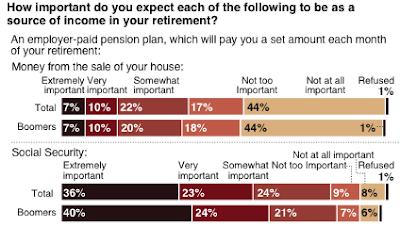 At the other end, about 1 in 10 say they have banked at least $500,000. Those who have saved at least something typically have squirreled away $100,000, with about half putting away more than that and half less.

It would be interesting to see what that “Money from the sale of your house” response in the graphic above was five or six years ago. My guess is that the “Extremely/Very Important” response would have been some multiple of the current 17 percent.

I’ll never forget that time back in about 2006 when I raised the possibility of home prices falling significantly with my dentist as he was about to put both hands in my mouth. He pulled back and said, "They better not. My retirement is depending on it." He’s probably had to rethink his golden years at least a little bit.

This blog was republished with permission from The Mess That Greenspan Made.