Gold investment performed slightly better than other leading investments in 2010 including REIT stocks and small stocks. It was the second year in a row of over 25 percent price growth for gold. See the following post from The Mess That Greenspan Made.

Once again, the last day of the year occurred on a weekend, so, making precise year-over-year comparisons gets just a bit easier, an example of this being the Wall Street Journal’s What’s Hot – and Not graphic from a couple of days ago in which the right-hand column summarizes another year of investment returns. 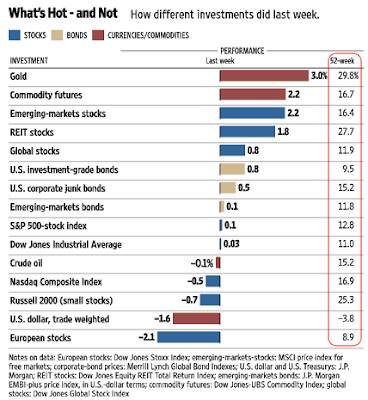 Missing from this list are many important investment choices where the 2010 gains were much bigger than gold’s 29.8 percent move up (e.g., silver, a handful of agricultural commodities, and many stock sectors), but, based on the ones they have seen fit to include, the yellow metal posted the biggest advance in 2010, just outpacing REITs.

The prior two year-end editions of the What’s Hot – And Not graphic are shown below for anyone wanting to relive some of 2008 and 2009.

Remember the remarkable rise in oil prices two years ago? No, not three years ago, two years ago. It’s there in the year-end tally for 2009 along with a host of other mid-double digit gains, making gold’s 2009 performance of +25.8 percent seem quite pedestrian. 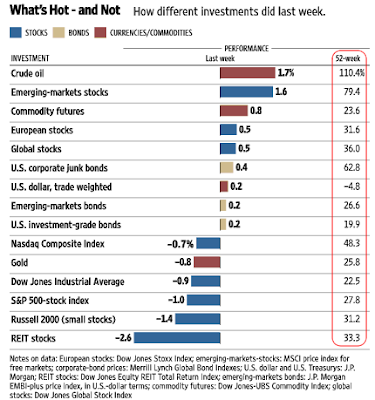 Rewinding another year to 2008, a much different picture emerges, the trade-weighted dollar being one of only two investments in the list to advance. The other gainer in 2008 was that barbarous relic and, two years removed from this watershed event, most investment advisers still have no use for the metal despite it’s encore performances in 2009 and 2010. 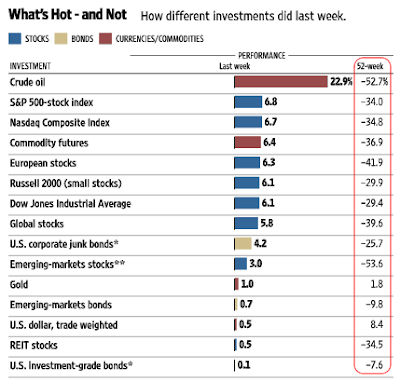 Recall that Treasuries also had a good run three years ago when nearly everything else tumbled and they really should be included in this list.

Who knows what we’ll see in 2011. With recently surging prices for both stocks and commodities, you hear a lot of comparisons to 2008. We’ll see…