The government is challenged with finding the right balance between funding social insurance and taxing individuals without reducing incentives to provide valuable services. Mark Thoma discusses how a progressive tax helps solve the incentive problem. See the following post from Economist's View. 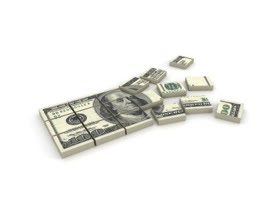 's another thought relating to this post. Our basic notion of social insurance is that each of us is placed, at birth, in a set of circumstances beyond our control. Before birth, we're not able to write insurance contracts that will compensate us for being born poor, for being born with a serious disease or birth defect, or for other possible bad events. There is then some role for the government in stepping in to provide the insurance that the private market cannot provide, by redistributing income from the rich to the poor, providing health care, or other interventions.

The problem we have to deal with is that, as we teach students in Econ 101, prices help to allocate resources efficiently. To a degree, people are rich by virtue of the fact that society puts a high value on their services, and society puts a high value on their services because these are the services society wants. To provide the services that society wants, people have to be motivated to provide them. Becoming a skilled brain surgeon requires time and effort, and people won't do it if there is no payoff.

Thus, what we have here is a very standard economic problem. We are trading off insurance with incentives. ...

When I see the argument about trading off incentives (efficiency) for insurance, the first and most basic question is if there is a market failure preventing the insurance from being offered by the private sector -- and there seems to be -- why does correcting it reduce rather than increase efficiency? (On the need for social insurance more generally -- Social Security in particular -- and the underlying market failure problems, see here.)

But I want to ask a different question. Why aren't incentives subject to diminishing returns? Suppose that the normal rate of profit is 5%, and the expected re4turn on a the investment in new, novel, innovative product is 12%. If we, through taxes, reduce the expected return to 10% or 11%, how much would incentives fall? I think the answer is "not much, if at all." By standard diminishing returns arguments, the first increase of one percentage point (to 6%) ought to provide the largest change in incentives, the next increase to 7% somewhat less, to 8% less yet, until at some point the incremental value in terms of incentives is near zero. When profit rates are very high, the tradeoff seems much less important.

Thus, even if a negative tradeoff between insurance and efficiency exists -- and as noted in the first paragraph it's not clear that it does -- the negative effects appear to be relatively small when profits are expected to be far above normal.

However, a tax that, say, reduces the expected return on every project by 2% could cause problems for those projects that have expected returns near normal (e.g. if the expectation is 6.5%, the tax would make the project unprofitable). But there is a way around this, at least to an approximation that is close enough. Highly progressive taxes only hit the very successful -- such as those projects where the winner takes all and has very high profits -- while hardly affecting projects that do not result in such high incomes as rewards. Thus, this sort of scheme can provide the insurance that is needed without having much affect on incentives, the thing many seemed most worried about.