With home values set to decline about $1.7 trillion in 2010 in addition to the $1 trillion lost last year, the decline in property tax revenues will put a strain on struggling local government budgets. California, with budget gap of around $28 billion, is an example of a state in fiscal disarray and faces huge home equity losses in cities like Los Angeles and San Francisco. See the following post from Expected Returns.

The double dip in housing continues to b 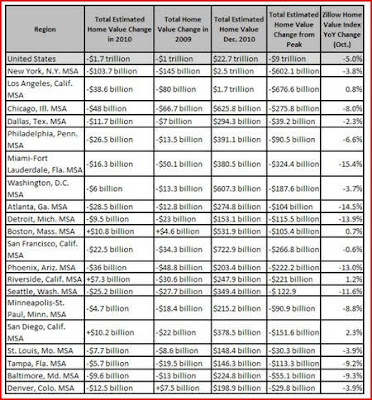 e confirmed by multiple sources. The research group Zillow just came out with a report that says homes are on pace to lose $1.7 trillion in value this year. To put this number in perspective, homes lost $1 trillion in value in 2009. If anything, the decline in real estate is accelerating, especially since most of the gains in home prices earlier this year were due to the homebuyer tax-credit.

I’ve made the point that falling home prices will eventually bring down tax revenues in states already in fiscal disarray. Let’s take California as an example. The budget gap estimate in California has recently been raised a couple of billion to $28 billion. Two of the larger cities in California, Los Angeles and San Francisco, are set to lose over $60 billion in home value this year. Mortgage rates have risen to a 5-month high, which will put additional pressure on housing. Assessments are lagging much more than they usually do because the downturn in housing has been so sharp and unprecedented. Add to that the increase in servicing costs caused by the expiration of Federal subsidies, and you can start to see why the crisis for states is heading into high gear.

There is no real solution to the looming crisis in states since the Federal government is facing bankruptcy issues of its own. I fail to see how the situation in America is materially different from that of Europe since both governments are borrowing money to meet basic costs. We clearly are not going to grow our way out of this structural debt problem. The solutions to this debt crisis should be much more creative than merely raising taxes and cutting services. We are entering a time window (2011-2015) that I believe will set a totally different tone for our economy. 2010 was supposed to be the year of the recovery; we all know now that people were far too optimistic.

How long do we have to muddle along before people just admit we are in a Depression? I am positive that now is the time to get prepared for events of crazy proportions. Will my message largely fall on deaf ears? Probably. But hopefully some of you understand the magnitude of our problems and are preparing accordingly. This post has been republished from Moses Kim's blog, Expected Returns.
Posted by: NuWire Investor @ 5:56 AM