Geithner Denies US Is Seeking A Weaker Dollar For Competitive Advantage

After Alan Greenspan wrote this week that the US is pursuing a policy of currency weakening, Treasury Secretary quickly responded that the US does not seek a weaker currency to gain a competitive advantage or grow the economy. Whether or not officials from other countries believe Geithner, there is a growing concern about the global risks caused by the US monetary policy. See the following post from The Mess That Greenspan Made.

One more way in which the U.S. and its currency are quick 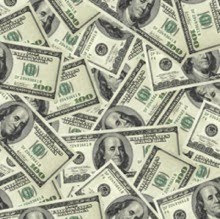 ly losing credibility around the world comes in the now laughable ongoing commentary by Treasury Secretary Tim Geithner about the trade weighted dollar.

While having the good judgment not to mindlessly repeat the mantra that “the U.S. favors a strong dollar”, a practice that made some of his predecessors (i.e., O’Neill and Snow) appear almost buffoonish, Geithner comes off as being hopelessly out of touch with the impact that Federal Reserve policy (i.e., printing up another $600-$900 billion to monetize the debt) is having on the international value of the dollar.

The latest round of head-scratching comes in Geithner’s response to charges by former Fed Chief Alan Greenspan that “America is pursuing a policy of currency weakening” in a Financial Times op-ed($) earlier in the week, the unstated tool of this policy being the aforementioned hundreds of billions of new U.S. dollars.

In a CNBC interview, Geithner responded, “We will never seek to weaken our currency as a tool to gain competitive advantage or to grow the economy” in what is beginning to sound a lot like, “the U.S. favors a strong dollar” from the days of Paul O’Neil and John Snow.

Of course, the big difference today is that the world is no longer wondering about possible disruptions that might result from a forced rebalancing of the global economy. What is clearly the more pressing concern is that we somehow avoid another financial market melt-down like the one in 2008 and Geithner’s words are, understandably, not being greeted with the same sort of nonchalance as that of former Treasury Secretaries.

The Fed is undoubtedly weakening the dollar and calls by German Finance Minister Schaeuble that the Fed is “clueless” may soon be directed toward the Treasury Department.