Professor Peter Morici says that complaints over QE2 by countries like Germany, Japan, and China are unfounded due to the US' combined trade deficit of $448 billion to these countries since the recovery began. Morici proposes a tax on purchases of yen, yuan and euro for imports from these countries to encourage currency reform. See the following post from The Street. 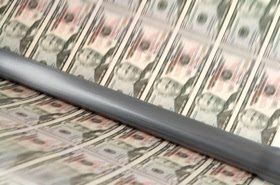 As President Obama heads for the G-20, Germany and others cry foul about U.S. quantitative easing (QE2 in popular jargon).

Seldom has the G-20 been treated to such hypocrisy.

Since 1995, China has done the same on a grander scale. To keep its currency about 40% below its market value against the dollar, it prints yuan to purchase dollars, and then purchases U.S. Treasuries. That makes Chinese exports artificially cheap, and powers a huge trade surplus and 10% economic growth.

Inexpensive Chinese goods at Wal-Mart (WMT_) come at a steep, hidden cost. They destroy U.S. factory jobs that are not replaced by new employment to make exports.

At the October meetings of the International Monetary Fund, Germany and Japan rebuked U.S. requests for help in persuading China to stop intervening in currency markets. That was hardly surprising, as both profit from currency mercantilism too.

Through the 1980s and 1990s, the Bank of Japan intervened in currency markets to keep the yen, and auto exports, artificially cheap. Subsequently, it imposed near zero interest rates, and encouraged private investors to borrow yen, convert those to dollars and then purchase higher yielding U.S. Treasuries in a disguised variant of China's manipulation.

After the Federal Reserve moved to near zero rates too, Japan made clear that it will intervene in currency markets should the yen fall too far, spooking speculators from betting on yen appreciation.

The German scheme is more complex.

Exchange rates translate the whole register of prices for goods and services in each country into the dollar, which is the international yardstick for pricing products and debt.

Germany is in the eurozone with Portugal, Ireland, Greece, and Spain, countries whose economies are less efficient than Germany's and where sovereign debt is suspect. The risk one of their governments will default pulls down the value of the euro.

Were the eurozone to split up, the value of the new Deutsche mark-- and resulting dollar prices for German products on world markets -- would be much higher than the current euro-dollar rate implies. Conversely, dollar prices for the new currencies of Greece and others would be much lower, and competitiveness of their products much stronger on world markets, than the current euro-dollar rate indicates.

U.S. consumers and businesses are spending again but too much goes into imports instead of creating American jobs. Since the recovery began, the combined U.S. trade deficits with China, Japan and Germany is up $127 billion and now totals $448 billion.

With the Gang of Three stonewalling on currency talks, the U.S. economy is growing well below potential and unemployment hovers near 10%. Now, the United States has resorted to QE2.

The United States should tax purchases of yen, yuan and euro used to import goods from those three economies. Set it at about 40% until the Gang of Three agrees to acceptable exchange rate reforms.

Such a tax would inspire a different tune -- perhaps, "God Bless America" -- and a pilgrimage to Washington to strike a deal.