Will A Republican Majority In Congress Help The Economy?

With the prospect of Republicans taking back control of congress, will the change make an impact on the state of the economy? Peter Morici says that Republican and Tea Party proposals do not address the major issues of trade with China and the 3,000 troubled regional banks. See the following post from The Street. 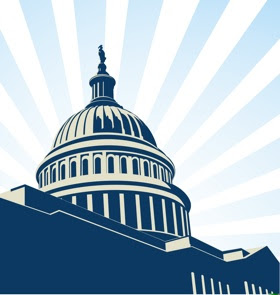 y celebrate but for ordinary Americans, the election won't fix much.

Regardless of which party is in power, Americans don't like what Washington does.

Since taking control of Congress in 2007, Democrats have permanently boosted federal spending from less than 20 percent of GDP to more than 25 percent, and increased the deficit from $161 billion to $1.3 trillion.

Now they want higher taxes, but none of this creates the jobs America needs.

Since January, private businesses, excluding government subsidized health care and social assistance services, have created 57,000 permanent private sector jobs a month. That is about 131 per congressional district, 18 per county and 0.004 per job seeker!

Tuesday the Republicans will enjoy their most significant gains in congressional districts in Pennsylvania and the Midwest, where private industry has been decimated by foreign competition and a shortage of bank credit.

Middle America wants the opportunity to prosper in free markets but they expect their government to ensure markets are not rigged against them.

American are spending again but businesses lack customers and can't create jobs, because China and Japan rig their currencies to make their coffee makers and cars artificially cheap, and protect home markets to keep out U.S. exports.

President Obama has done little about these problems other than plead with those malefactors.

Meanwhile, small and medium sized businesses can't get financing, because Main Street banks are starved for capital and being bullied out of business by Wall Street behemoths, assisted with funds from Washington.

Americans may not like Obama Care, but they want the health care mess fixed just the same. They pay 50 percent more than the Germans and French, because of higher prices for drugs, hospital stays and doctor visits, and a mindless insurance bureaucracy that makes obtaining a prescription for Ambien an adventure that rivals an IRS audit.

Neither the Republican Pledge to America nor the Tea Party platform, near as it can be deciphered, addresses trade issues with China and others, or the woes of 3000 regional banks that may soon disappear. And Americans are tired of Republicans ranting that medical savings accounts and competition will deal with health care monopolies.

History has taught us Republicans complain about the abuses of political correctness when they are out of power but lack the stomach to fix those when they get the reins. After all, the best and brightest conservatives attended the same Ivy League seminaries as their opponents on the left.

The Republicans will control the House and get some things done, but they won't fix what's broken in the economy. They won't end the mindless abuse of Middle American values that is stylish at universities and cocktail parties on the banks of the Potomac.