Jason Schwarz, writing in The Street, explains why he thinks gold is a major bubble that could result in prices falling 70 percent. His reasons include a diminishing level of fear, September's strong stock market performance, and the George Soros warning that gold the ultimate bubble. See the following post from The Street.

The gold bubble is preparing to burst. You can te 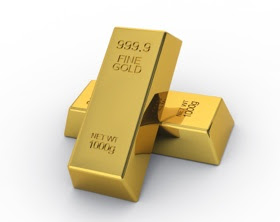 ll we're near the end because of the confusion of rationale seeking to explain the precious metal's continued rise.

Let's uncover the real story behind the gold bubble.

There have been four groups who have participated in this run-up:

As the financial crisis unfolded, gold served as the ultimate investment vehicle to profit from fear because of its unique characteristics. It isn't valued on fundamentals, it generates no earnings, it pays no interest, it is essentially a perpetual zero-coupon bond that is easy to manipulate into a snowball effect.

This ambiguity made the asset a prime profit-generating allocation during times of uncertainty. Unfortunately for current gold investors, fear/panic is diminishing by the day. Without that essential element, the big money will exit the trade. September's strong stock market performance was the beginning of a new stage -- a stage that I refer to as a "sigh of relief."

Investors have endured panic for three years, and gold has rightfully gone up. Now that the cataclysmic panic is subsiding those left carrying gold in their portfolios are trying to come up with reasons to justify the holding. Quantitative easing is a tough sell. Slow growth isn't enough. The time looks ripe for the investment vehicle of fear to break down.

Gold at $1,400 an ounce is eerily similar to oil at $140. Remember all the credible firms extrapolating the speculative action into $200 oil forecasts. Those same bubble-builders are now calling for $2,000-an-ounce gold.

I may not be very old, but I've already seen this movie three times. During the 1999 holiday season individuals who had never bought a tech stock were buying Lucent(LU). In 1996 family and friends talking about flipping real estate at neighborhood barbecues. In 1997 I was flooded with hate mail when I suggested oil would plummet to $30 a barrel.

I'm afraid we're about to watch this movie a fourth time. A typical bubble burst of 70% from today's $1,346 closing price would put gold at $400/ounce, strikingly close to its precrisis norm.

If you don't believe me, then believe the architect of fear himself, George Soros. Last month, Soros told investors that gold is the ultimate bubble and that it's "certainly not safe, and it's not going to go up forever."

Investors looking ahead see an environment where Kohl's(KSS) is hiring 40,000 employees for the holiday season and Toys R Us is hiring 45,000. Investors see a 2011 of pro-growth government policy. Investors see tech companies flush with cash that are struggling to keeping up with consumer demand. Investors hear JPMorgan(JPM) CEO Jaime Dimon forecasting that his bank will thrive in the new regulatory environment. Housing and employment are two remaining obstacles to overcome, but both have been weak for so long that the market has had ample time to price in the weakness.

Option LEAPS are a great way to take advantage of bursting bubbles. Buying an out-of-the-money put at a strike price 70% less than the peak of the Nasdaq, housing or oil bubbles would have cost you relatively nothing at the time.

An oil LEAPS put at the $40 strike price could have been purchased for 0.50 in July 2008. By December 2008, those options were trading 20 times higher at 10.00. I'm banking that sometime over the next 12 months the same thing happens to gold. We're buying a relatively inconsequential 2.5% allocation of SPDR Gold Shares January 2012 $80 puts that will increase in value 20 times themselves if and when GLD drops to its 2007 level of around $600.

At the time of publication, Schwarz was short SPDR Gold Shares (GLD) via the puts, not stock.

This post by Jason Schwarz was republished from The Street.
Posted by: NuWire Investor @ 5:52 AM

When they print the dollar like it's toilet paper - you can be sure gold and silver are goin' up!

I liked this article, it is likely that this could happen. I have one question, what did you mean by "Investors see a 2011 of pro-growth government policy."

dude, how are your puts on gold workin' out?? lol