Las Vegas: The Epicenter Of The Housing Downturn

As the epicenter of the housing downturn, Las Vegas real estate continues to spiral downward with entire neighborhoods left nearly vacant. The once booming city that was attracting a million people per month has now led the nation in foreclosures for 44 straight months. See the following post from The Mess That Greenspan Made.

Nowhere has the combined housing boom/bust be 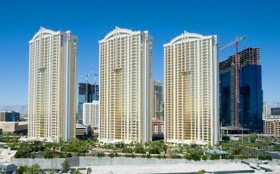 en more severe than in Las Vegas where, according to the latest S&P Case Shiller Home Price Index, prices continue to fall, down in July for the 44th time in the last 46 months for a cumulative loss of 57 percent since 2006.

Of course, prices rose by 50 percent in 2005 (prompting me to wonder if my old boss ever sold his “investment property” there after starting to “chase the market down” in 2007), yet another example of how timing is everything. Those who weren’t so good with their timing now seem to be timing their exit from the area as detailed in this AFP story today.

Earlene Howard is the only person left living in a house on her block in Sin City, and she’s not sure how much longer she’ll be there as the once booming Las Vegas housing market continues to spiral downwards.

The rest of her neighbors have seen their homes repossessed by lenders, and she’s already behind two months on her mortgage after her husband lost his job with a local construction company.

“I think we may need to move back to Denver,” said Howard, 42, who uprooted to Las Vegas in 2005 because jobs were plentiful here then. “This city is not in good shape. Not at all.”

Howard lives in the epicenter of America’s prolonged economic downturn.

The once-booming Las Vegas region has for 44 straight months led the United States in home foreclosures, and 80 percent of houses here are figuratively underwater — worth less than the debt owed on them.

They go on to recount the city’s history and its now uncertain future, making it hard to believe that, back in the 1990s – early-2000s heyday, a million people a month used to move there in search of a brighter future. It would appear that about the only things that are still bright in Las Vegas are the lights.