What Could Cause An Economic Collapse

Jeff Nielson, writing in The Street discusses the prospect of hyperinflation that could occur if the economy continues to worsen and another fiscal stimulus is passed. While the dollar has been supported by the expectation of more fiscal restraint, an opposite outcome could result in a loss in confidence in the dollar. See the following article from The Street.

Most market reporters, commentators and politician 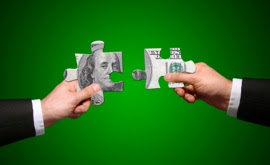 s continue to rely upon nothing but the same short-term "snapshots" which have caused them to be "surprised" by everything. However, it is a safe conclusion that even such rampant incompetence (combined with a strong "herd mentality"), could not and does not mean that the entire U.S. government remains in an oblivious state of ignorance regarding this re-acceleration of the collapse of the U.S. economy.

This begs an obvious question. Given that at least some elements of the U.S. government have known all along that the U.S. economy was not recovering and could not recover, why is it that only now are we hearing of tentative, new plans of more "life support" for the dying U.S. economy?

The answer is also obvious. As I pointed out when I originally denounced the Obama stimulus package, it was never anything more than a bad joke. The combination of the collapse of the U.S. housing sector, massive unemployment, and the largest credit-contraction in the history of the U.S. economy had combined to subtract approximately $2 trillion per year in consumer spending from this consumer economy.

The response of the Obama regime to this scenario was a one-time injection of $780 in stimulus, spread out over more than a year. Obviously, you can't replace $2 trillion with less than $800 billion and call it stimulus.

This brings us to the present dilemma of the U.S. government. The U.S. economy is much sicker than it was when Obama ascended the throne. Wall Street has continued to ruthlessly choke off all credit to the U.S. economy, meaning that tens of millions of American households and tens of thousands of businesses are much closer to the breaking point than they were in January of 2009.

The entire U.S. retail sector is in a terminal death-spiral, and its only response is to eliminate vast numbers of retail outlets, and herd consumers into more online retailing. While this cuts costs for these companies, most of those cuts will be reduced employment -- fueling the next leg lower for consumer demand, resulting in even more store closures, etc.

This means that the trivial "band-aids" being mused-about by government talking-heads are utterly meaningless. Simply, the Obama regime has to "go big, or go home." It must either engage in massive (genuine) stimulus of the U.S. economy -- meaning a multi-trillion dollar commitment, or simply allow the collapse to proceed (and feed upon itself). However, in even contemplating another, massive wave of spending, Obama faces two other problems (which he created for himself).

Throughout this "U.S. economic recovery," the U.S. government has continued to pretend that it was almost ready to begin some actual, fiscal restraint -- halting the exponential increase in federal government debt. That was the only thing propping up the U.S. dollar (putting aside the constant Euro-bashing by the U.S. propaganda-machine). Allow another sickening plunge in the U.S. dollar, and that will drive away the last, few chumps still insane enough to buy grossly over-priced U.S. Treasuries. This is the road that leads to hyperinflation.

If this was not bad enough, the Obama regime has continued to be successful in duping both the vast majority of sheep in the U.S. electorate, as well as Republican knuckle-draggers that the U.S. economy was "strong enough" to begin to curtail runaway spending. This pool of chumps is looking for spending cuts, not a multi-trillion spending spree.

Thus, the U.S. government is facing exactly the same scenario today as the Bush regime faced in the summer of 2008. In hindsight, we all know what choice the previous government made. Lehman Brothers was "assassinated" -- as the first step in a concerted effort to destroy commodities markets. The collapse in these vital markets, combined with the collusion among Western bankers to choke off all credit to credit-based Western economies achieved its desired objective: a global "economic collapse," and the expected panic which such an artificial crisis would naturally produce.

It was only through this panic that frightened sheep (i.e. U.S. citizens and government "leaders") meekly submitted to the largest "bail-out" in history for Wall Street: a combination of hand-outs, loans, and guarantees which exceeded every other corporate bailout in every country on Earth, throughout history, combined. The last estimate I heard of the nominal value of this bailout was approximately $14 trillion, matching "official" U.S. GDP. The number will continue to increase (even without any new bailouts), as all of the 0% money being "loaned" to Wall Street banks is yet another taxpayer subsidy (since even the U.S. government can't borrow at 0%).

Given the current circumstances of the U.S. government, and past history, the "plan" is clear: do nothing long enough for the U.S. propaganda-machine to whip-up public fear into another frenzy, and then (and only then) will it "act decisively" to address this new "crisis." There is a second audience at which this clumsy charade is aimed: the governments of other nations.

While we must presume that a small number of these other governments understand the true state of the U.S. economy (China leaps to mind), most of these governments have been quite content to "drink the Kool-aid" being dispensed by the U.S. government. Should the Obama regime simply announce ("out of the blue") a multi-trillion dollar spending package, these willing dupes would be forced to confront reality: that the U.S. government has clearly embarked upon the road to hyperinflation.

However, create a "crisis" first, and we can expect these "leaders" to instantly transform into a flock of Chicken-Littles -- desperate for some massive prop, to prevent the sky from falling upon them. Understand that for the ivory-tower leaders of our governments that a crisis means nothing more to them personally than being thrown out of their pampered, government posts -- and being forced to survive upon the extremely generous public-pensions they award themselves.

It is such "me-first" selfishness which inspires the most blind-panic in any crisis, and the U.S. government is clearly relying upon such a reaction. They can announce their multi-trillion rescue of the global economy, and maybe, just maybe the self-absorbed leaders of other countries will blind themselves to the hyperinflationary consequences of more print-and-spend insanity. There is no more money for the U.S. government to borrow, thus every penny used as a response to this pending crisis will be newly-printed Bernanke bills.

This sets the stage for another chaotic autumn for the global economy -- and even more chaos for markets. While I have outlined what I consider the most likely scenario, we are so close to the true collapse of the sickest economies that there are many dire scenarios possible.

The one scenario which I totally reject is another commodities meltdown which would come anywhere close to 2008. There are two reasons why this part of the pattern cannot repeat itself. To begin with, there is only a tiny amount of the "leverage" which existed in the rabidly bullish commodity markets of 2008. Secondly, the hyperinflationary consequences of more banker money-printing (and debt) are far more obvious today -- after two years of massive, deficit-spending have been factored into fiscal parameters.

The U.S. economy lurches closer and closer to the "hyperinflationary depression" which John Williams (Shadowstats.com ) first predicted in 2003. The precise effect of this collapse on the global economy cannot be predicted -- only its eventual result. We are heading toward a Great Divide: a division of the global economy into winners and losers.

This is not a new phenomenon. What is new is that most of the losers will come from the "Old Guard" economies (i.e. the U.S. and Western Europe). The citizens of these "loser economies" must act now to shield their diminishing wealth from the death of Western banker-paper which is almost upon us. As always, I remind investors that (for hundreds of years) precious metals have represented the best "insurance" against the depravity of bankers (and their servants in government).

This post has been republished from The Street, an investment news and analysis site.
Posted by: NuWire Investor @ 5:52 AM