Negative Equity Could Last A Decade For Many Homeowners

The upcoming report on July existing home sales could reveal whether the housing market can stand on its own without government incentives. A negative perception of housing as an investment in tandem with an oversupply of housing inventory opens up the possibility that homeowners may be underwater for a decade. See the following post from The Mess That Greenspan Made.

Mark your calendar for next Monday, August 23rd 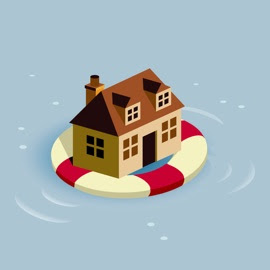 , because that’s when existing home sales for the month of July will be reported – the first sales total after the government stopped “paying people to buy houses” as Robert Shiller recently noted. At that time, whatever hope there once was of a sustainable rebound in property prices is likely to be dashed.

In this Bloomberg commentary today, Michael Carliner brings up the disturbing possibility that we might be hearing about underwater homeowners for many years. I don’t know about you, but I think I’ve already heard enough on this subject to last the rest of my lifetime.

If expectations reflect changes in home prices over the last three years, for example, consumers seem to anticipate annual house price declines of 3.7 percent to 10.4 percent, depending on which of the various house price indexes is used.
…
What will it take to turn this attitude around? Only a sustained flow of favorable information is likely to alter negative perceptions of housing as an investment. The market is unlikely to provide such good news in the near term.

More likely, markets will reinforce expectations of further price declines. Even with new home construction declining, there are too many houses for sale. And when the bounce provided by the home buyer tax credit ends, there will be renewed pressure on prices.
…
The reality is that the real estate market won’t fully recover until builders and consumers start believing once again that housing is a relatively safe investment with reasonable returns, and that will take some time.

Of course, the continued, slow emptying of the “foreclosure” pipeline into the resale market will put downward pressure on prices for years to come, the banks seeming to be in no hurry at all to move things along any faster than the current glacial pace. We could be hearing about underwater homeowners for the rest of the decade…