Greece has taken very aggressive measures to reduce their budget deficit by 39.7 percent but the short-term consequences have been relatively severe. Unemployment is expected to reach 14 percent by 2011 while consumer spending has fallen drastically and has led to a large number of store closings. See the following post from The Mess That Greenspan Made.

Der Spiegel reports on how Greek society is ad 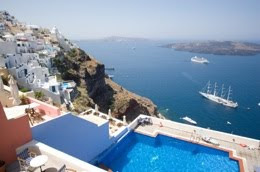 apting to the many “austerity measures” that have been enacted in recent months. It sounds as though the painful (yet much needed) lowered expectations of what government can and should provide are well underway.

The austerity measures that were supposed to fix Greece’s problems are dragging down the country’s economy. Stores are closing, tax revenues are falling and unemployment has hit an unbelievable 70 percent in some places. Frustrated workers are threatening to strike back.
…
The government’s draconian austerity measures have managed to reduce the country’s budget deficit by an almost unbelievable 39.7 percent, after previous governments had squandered tax money and falsified statistics for years. The measures have reduced government spending by a total of 10 percent, 4.5 percent more than the EU and International Monetary Fund (IMF) had required.

The problem is that the austerity measures have in the meantime affected every aspect of the country’s economy. Purchasing power is dropping, consumption is taking a nosedive and the number of bankruptcies and unemployed are on the rise. The country’s gross domestic product shrank by 1.5 percent in the second quarter of this year. Tax revenue, desperately needed in order to consolidate the national finances, has dropped off. A mixture of fear, hopelessness and anger is brewing in Greek society.

They go on to provide a number of anecdotal accounts about how life has changed for both individuals and communities with conditions not likely to improve any time soon given that massive layoffs are expected this fall.

As is the case in the U.S., consumer spending in Greece accounts for more than two-thirds of all economic activity, a statistic that, in itself, should be quite frightening to us ‘Mericans. Come to think of it, that would be an interesting graphic to see for 15 or 20 nations around the world - consumer spending as a percent of GDP. My guess is that, along with the U.K., we already know three of the top five.

Anyway, in Greece, they are now cutting off the source of much of that spending…

Prime Minister George Papandreou’s austerity package has seriously shaken the Greek economy. The package included reducing civil servants’ salaries by up to 20 percent and slashing retirement benefits, while raising numerous taxes. The result is that Greeks have less and less money to spend and sales figures everywhere are dropping, spelling catastrophe for a country where 70 percent of economic output is based on private consumption.

A short jaunt through Athens’ shopping streets reveals the scale of the decline. Fully a quarter of the store windows on Stadiou Street bear red signs reading “Enoikiazetai” — for rent. The National Confederation of Hellenic Commerce (ESEE) calculates that 17 percent of all shops in Athens have had to file for bankruptcy.
…
The entire country is in the grip of a depression. Everything seems to be going downhill. The spiral is continuing unabated, and there is no clear way out. The worse part, however, is the fact that hardly anyone still hopes that things will improve one day.

The country’s unemployment rate makes this trend particularly clear. In 2009, it was 9.5 percent. This year it may rise to 12.1 percent and economists expect it to reach 14.3 percent in 2011. Those, though, are only the official numbers, which were provided by Angel Gurría, secretary general of the Organisation for Economic Co-operation and Development (OECD). The Greek trade union association GSEE considers those numbers far too optimistic. It considers 20 percent to be a more likely figure for 2011.

It should be interesting to see what happens now that the Greek people have progressed through three of the five stages of grief – denial, anger, and bargaining.

Now apparently in stage four – depression – the big question is whether they’ll ever make it to the final stage - acceptance.