The Yuan Continues To Negatively Impact The Economic Recovery

The Chinese yuan continues to negatively impact the US economic recovery, even as the Federal Reserve acts to keep interest rates low. With the US dollar still artificially overvalued against the yuan, demand for US goods and services continues to decline and increase fears of US deflation. See the following article from The Street for more on this. 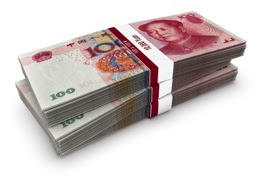 When the Federal Reserve Open Market Committee meets Wednesday, no one expects it to raise the federal funds rate -- the overnight bank rate that now hovers below 0.25%. However, businesses, politicians and prognosticators are eager, perhaps inappropriately so, to hear clues about when it will begin raising short-term interest rates to a more normal level.

Simply put, Fed policy is much less relevant to U.S. growth and price stability than in the days of Paul Volcker. That's because China's yuan policy has substantially limited the importance of Fed interest rate decisions by severing the historic link between short interest rates -- like the federal funds rate it targets -- and long rates on mortgages, corporate bonds, and the securities banks use to finance lending on cars and credit cards.

Through the boom years of the last decade, Beijing printed yuan to purchase hundreds of billions of dollars in foreign exchange markets. That made the yuan and Chinese products on U.S. store shelves artificially cheap, and imports from China, coupled with higher prices for imported oil, pushed the U.S. trade deficit to more than 5% of gross domestic product from 2004 to 2008.

When Americans spend that much more abroad than foreigners purchase in the United States, American goods pile up in warehouses and a steep recession will result, unless Americans spend much more than they earn or produce.

During the boom, China facilitated such folly by using its dollars to purchase U.S. Treasury securities, and that kept U.S. long interest rates artificially low even in the face of Federal Reserve efforts to rein in spending.

From 2003 to 2006, easy terms prevailed on mortgages, homeowner lines of credit, car loans, and credit cards even as the Fed raised the federal funds rate. Americans borrowed against their homes, pushed real estate prices to unreasonable levels and spent on Chinese goods at Wal-Mart (WMT) until the credit bubble burst in late 2007 and 2008.

China continues to recklessly print yuan to buy dollars and U.S. Treasuries, and all those yuan are creating inflation and real estate speculation in China that Beijing can't contain.

With the dollar still overvalued by some 40% or 50% against the yuan, the U.S. trade deficit with China, and other Asian countries practicing similar currency mercantilism, is growing again. This deficit saps demand for U.S. goods and services, slows U.S. recovery, suppresses U.S. land values and fuels fears of deflation in the United States, even though the U.S. banking system is flush with cheap credit from the Fed.

The fact is nothing the Fed does can appreciably accelerate U.S. economic recovery or stem deflation as long as China continues to print yuan, buy dollars and U.S. securities, and make its products woefully cheaper than its comparative advantage warrants in the United States and Europe.

Coupled with its high tariffs and administrative barriers to imports on anything the Chinese can make themselves, no matter how awkwardly or inefficiently, Beijing is hogging growth and jobs and spreading unemployment and budget misery among workers and governments from Sacramento to Athens.

This past weekend, Beijing announced it will permit some more exchange rate flexibility, but we have heard those words before. China will likely permit the yuan to rise slightly against the dollar -- much less than 6% a year -- while the true value of the yuan rises much more, thanks to Chinese modernization and productivity improvements.

China's announcement is a cynical ploy to assuage critics less than a week before G20 meetings, and without a substantial one-off revaluation of the yuan, Beijing's words are hypocritical and selfish.

China's yuan policy makes the Fed nearly irrelevant but for crisis management such as bailing out big banks and European governments that make fatal mistakes.

Worse, President Obama's failure to take strong action against Chinese currency manipulation -- for example, a tax on dollar-yuan conversion to make the price of Chinese products reflect their true underlying cost -- crippled the jobs creation effectiveness of his $787 billion stimulus package and delivers ineffective his broader efforts to resurrect the U.S. economy.

This article has been republished from The Street. You can also view this article at The Street, an investment news and analysis site.
Posted by: NuWire Investor @ 5:50 AM

Email ThisBlogThis!Share to TwitterShare to FacebookShare to Pinterest
Labels: yuan