Lack Of Home Sale Surge In May Raises Concerns

Contrary to industry expectations, US housing sales declined in May 2010 and the inventory of unsold homes increased slightly. While the US median home sale price increased slightly, the outlook for the housing market remains in question. See the following post from The Mess That Greenspan Made.

Much to the surprise of those who thought the U.S. housing market would enjoy another buying surge during the final two months of the homebuyer tax credit, the National Association of Realtors reported that home sales fell last month and remain far below the levels reached late last year when the first round of tax credits expired. 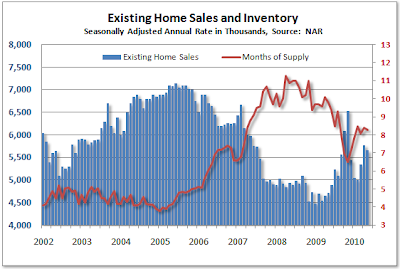 Of course, seasonal adjustments play a big role in the November-May comparison shown above since, normally, late fall sees the beginning of a dramatic slowdown in buying activity and the raw data is typically adjusted upward. But, nevertheless, the comparison is still quite striking and one can only imagine where the sales totals will go in July when no government money gets handed out with each home purchase.

Existing home sales fell 2.2 percent last month, from an upwardly revised annual rate of 5.79 million in April to 5.66 million in May, and the inventory of unsold homes remains quite elevated, the months of supply metric falling only slightly from 8.4 to 8.3 months, well above the low of 6.5 months back in November.

The median sales price for all types of homes sold was $179,600, up 2.7 percent from a year ago, and the number of distressed home sales continued to slow, down from 33 percent in April to 31 percent in May, far below the peak level of 50 percent back in early-2009.

With distressed sales at roughly the same level as a year ago, the gain in home prices is a hopeful sign that the market is in a good position to stand on its own without further government stimulus.

As for Chief Economist Lawrence Yun, he’s a bit less sanguine, more concerned about those homebuyers who may not meet the June closing deadline in order to get their government money:

We are witnessing the ongoing effects of the home buyer tax credit, which we’ll also see in June real estate closings. However, approximately 180,000 home buyers who signed a contract in good faith to receive the tax credit may not be able to finalize by the end of June due to delays in the mortgage process, particularly for short sales.

In addition, many potential sales are being delayed by an interruption in the National Flood Insurance Program. Florida and Louisiana, also impacted by the oil spill, have the highest percentage of homes that require flood insurance.

Naturally, the realtors’ trade group supports the efforts of Congress to extend the closing deadline by a few months, but, based on developments in Washington yesterday, this does not seem likely.