New unemployment filing trends continue to bounce around as the US economy continues a sluggish recovery. While some see current trends as an indication that new job growth in nonfarm sectors is stalling or declining, analysts believe that it may take months before a clear trend in the labor market can be identified. See the following post from The Capital Spectator. 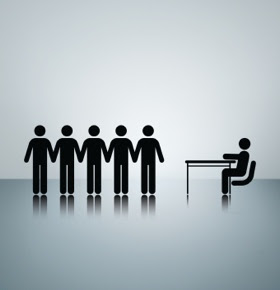 re of the same. New filings for unemployment benefits continue to bounce around in the seasonally adjusted weekly range of 450,000-500,000. That’s been true all year, and today’s report doesn’t change anything. The longer this goes on, the stronger the case for thinking that the rebound in the labor market is going to be sluggish—perhaps more so than even the generally muted expectations of a month ago.

As for the number du jour, new claims rose by 12,000 last week to a seasonally adjusted 472,000, the Labor Department reported today. That’s obviously a change in the wrong direction, but we’ve been here before and we may be here for a while yet. As our chart below shows, the trend for jobless claims has been trendless since last November. The sideways action isn’t unprecedented in post-recession periods, but the potential for trouble this time is substantially higher, given the unusually steep losses in nonfarm payrolls over the past two years.

"We need faster growth in employment, and we’re not at that point yet," Michael Englund, chief economist at Action Economics LLC, told Bloomberg News in advance of today’s report. "Whether we have adequate economic growth to bring down the unemployment rate significantly remains to be seen."

Indeed. Economic data rolls out with a substantial lag, and it takes months to see signs of a robust trend, for good or ill. The labor market news of late has been mixed, at best. Today’s jobless claims suggest it’s best not to expect much more, if that, in the weeks ahead. The meandering of jobless claims signals that it may be time to downgrade expectations for growth in nonfarm payrolls. The May employment report said more or less the same thing.

And on the subject of downgrading expectations, don’t expect much of anything tomorrow in the way of fresh statistical meat. Friday’s scheduled lineup of economic updates is nil. Into this numerical abyss comes tomorrow's quadruple witching for the markets. The absence of economic news and the potential for lots of unwinding in derivatives approaches. It’s a perfect metaphor for the road ahead. Lots of noise, light and heat, but nothing really changes much.

"We're going to see a lot of back and forth action," predicts Brian Belski, chief investment strategist at Oppenheimer and Co. via CNBC.com. "It's a trader's paradise."