Home Sales Fall Below Expectations In May

The second round of home tax credits appear to be less effective than the original and some analysts are predicting a second dip the housing market. Economists had predicting existing home sales to increase 5.0 percent but instead they fell 2.2 percent. See the following post from Expected Returns.

Existing-home sales remained at elevated levels in May on buyer response to the tax credit, characterized by stabilizing home prices and historically low mortgage interest rates, according to the National Association of Realtors. Gains in the West and South were offset by a decline in the Northeast; the Midwest was steady.

Existing-home sales, which are completed transactions that include single-family, townhomes, condominiums and co-ops, were at a seasonally adjusted annual rate of 5.66 million units in May, down 2.2 percent from an upwardly revised surge of 5.79 million units in April. May closings are 19.2 percent above the 4.75 million-unit level in May 2009; April sales were revised to show an 8.0 percent monthly gain. 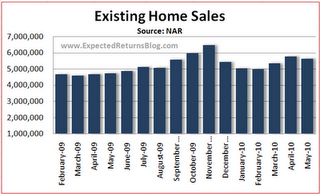 Weak NAR report that reflects the lack of demand even with sub-5% mortgage rates and tax credits. Economists forecast existing home sales to rise 5% to 6.06 million, so this is a big miss.

The second round of housing stimulus has been underwhelming, lagging the peak in home sales seen in November. This after 6 months of a supposedly recovering economy.

Inventories and Months of Supply

Total housing inventory at the end of May fell 3.4 percent to 3.89 million existing homes available for sale, which represents an 8.3-month supply at the current sales pace, compared with an 8.4-month supply in April. Raw unsold inventory is 1.1 percent above a year ago, but is still 14.9 percent below the record of 4.58 million in July 2008. 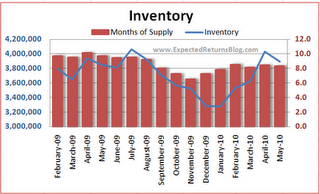 Inventories and months of supply remain elevated above healthy market levels. With home sales leveling off, we will likely see a supply shock in the second half of 2010.

This post has been republished from Moses Kim's blog, Expected Returns.
Posted by: NuWire Investor @ 4:49 AM