US consumer confidence levels took a plunge in June 2010, as concerns about the economy and the slowdown in job growth increased. Analysts believe that until the job outlook starts to improve, its unlikely that consumer confidence will increase. See the following post from Expected Returns.

From the Conference Board:

The Conference Board Consumer Confidence Index which had been on the rise for three consecutive months, declined sharply in June. The Index now stands at 52.9 (1985=100), down from 62.7 in May. The Present Situation Index decreased to 25.5 from 29.8. The Expectations Index declined to 71.2 from 84.6 last month. 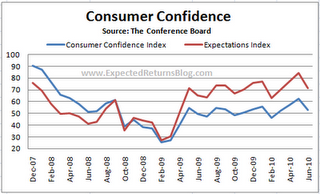 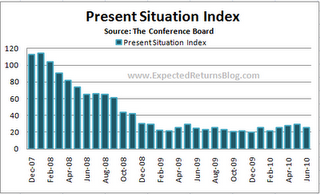 Says Lynn Franco, Director of The Conference Board Consumer Research Center: “Consumer confidence, which had posted three consecutive monthly gains and appeared to be gaining some traction, retreated sharply in June. Increasing uncertainty and apprehension about the future state of the economy and labor market, no doubt a result of the recent slowdown in job growth, are the primary reasons for the sharp reversal in confidence. Until the pace of job growth picks up, consumer confidence is not likely to pick up.”

Consumer confidence rose for each of the past 3 months before falling in June. While one month's data does not make a trend, consumer confidence is worth keeping an eye on. People are just starting to recognize the double dip in our economy that has been developing over the first half of this year.