One way to interpret the massive bailout of Greece is that the European politicians are willing to sacrifice the value of the Euro for short term political gain. Dr. Steve Sjuggerud argues that the bailout undermines the long-term credibility of the euro currency. See the following post from Daily Wealth. 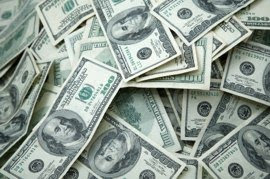 That's what the European Union promised in an emergency rescue package to stabilize the euro currency and Europe's financial woes.

In fact, the result turns out to be worse than nothing... It may prove to be the worst $1 trillion ever spent.

To me, this $1 trillion spells the end of the euro as a credible "threat" to the U.S. dollar. And it brings gold one step closer to being at least the world's No. 2 reserve "currency" (behind the U.S. dollar).

You see, before the $1 trillion promise (along with new promises from the European Central Bank to spend money to prop markets up), the euro currency had some semblance of credibility...

The euro's credibility goes back to the predecessor of the European Central Bank – Germany's "Bundesbank." For decades, Germany's old currency (the deutschemark) was one of the world's strongest. The Bundesbank had a reputation for not sacrificing the value of the deutschemark for political needs, so investors wanted to hold Germany's currency.

With the start of the euro, financial markets assumed the new European Central Bank would inherit the legacy of the Bundesbank. That's what kept the euro up as a credible threat against the U.S. dollar's world dominance.

But the $1 trillion promised over the weekend – along with promises to prop up the markets – killed the idea that the European Central Bank would act like the Bundesbank. It horribly damaged the euro's long-term credibility.

Now, the euro is just like a dollar – politicians are willing to sacrifice its value. Wait... a euro is now worse than a dollar. The euro is less traded (less liquid) than the dollar. And if the euro fails, there is nobody to blame.

Yesterday, in his excellent Gartman Letter, trading guru Dennis Gartman asked essentially, What is the propensity of the reserve banks of China and India to add euros to their reserve assets now? We have to think it is somewhat reduced from what it was only a short while ago... On the other hand, what is their propensity to own gold now? Almost certainly it is enhanced.

The numbers are showing it...

Gold is hitting highs in BOTH dollars and euros. In short, paper money really lost credibility over the weekend.

It's easy to sit in the States and see the problems over there. But the thing is, we have the same problems. We have too much government spending... and we have too many future promises we can't fulfill, like Social Security.

What makes our government's problems that much different than the countries of Europe? They're just ahead of us.

What we need is change... We need countries to commit to changing their ways.

You don't fix a drug addict by giving him more money. He'll go spend it on more drugs. Instead, you need to get him to rehab, to give him a fighting chance to change his ways.

You don't fix someone who's overspent on their credit cards and is living beyond his means by giving him more money. He'll simply get himself deeper in debt. Instead, you need to cut up the credit cards and force him to live lean for a while.

What can you do? Two obvious things:

2. Make your presence known to your government representatives. Do your best to "take their credit card away" and "send them to rehab" to prevent the U.S. from becoming the next Greece.

Both the dollar and the euro will be weak against gold, as politicians the world over have now proven they'll sacrifice the value of their currencies for short-term political gain.

This article has been republished from Dr. Steve Sjuggerud's blog, Daily Wealth.
Posted by: NuWire Investor @ 5:53 AM