The Euro Causes More Problems Than It Solves

Peter Morici at The Street argues that the Euro has also caused more problems than it has solved by taking away currency flexibility from poorer countries while rich countries like Germany prosper in the single continental market system. Poorer countries are having a difficult time convincing their citizens that they can afford the same extensive social benefits as other countries in the Eurozone. See the following post from The Street. 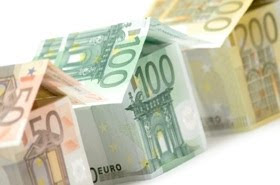 have been roiled by needless artifacts of postmodern Europe: the euro and malignant social safety nets.

For decades, European population and economic growth have been perilously handicapped by overly generous social benefits that discourage individual risk-taking and business entrepreneurship.

On both sides of the pond, progressives blame inadequate taxation but concede some curtailment of benefits is needed in less-affluent European states.

In a modern market economy, only a fool would not acknowledge an appropriate tension exists between welfare -- assistance for the truly needy and aged -- and efficiency -- policies that empower the rest of us to work and invest vigorously. Excessive coddling and taxation discourage people from working their full productive lives. They also discourage business innovation.

Multiyear unemployment and huge severance benefits, guaranteed health care for the able-bodied who refuse to work and other affectations of Europe's sympathetic face of capitalism surely cross those lines. However, like an alcoholic who knows he must quit drinking, Europeans have avoided the cure for decades by peddling bogus schemes to rekindle growth.

The 1992 Maastricht Treaty, which considerably harmonized product and safety standards and methods of taxation across the continent, was supposed to remove untold barriers to growth. It didn't, because European labor laws and social benefits still make individual ambition and investment in Europe about as sensible as my still unfulfilled dream to be Italy's prime minister.

The single currency, the euro, introduced in 1999 to facilitate commerce across borders from Ireland to Greece, was heralded as the next great elixir.

The euro addressed a problem that didn't truly exist and created new ones. Before it's introduction, the European Currency Unit linked at fixed rates the national currencies of many of today's eurozone countries. The dollar and the ECU were accepted in international commercial transactions.

However, each country could print its domestic currency and occasionally devalue or revalue against the group as circumstances required. With the euro that flexibility was taken away from poorer countries like Portugal, Spain, Greece,and Ireland. Tough EU restrictions on national budget deficits, reminiscent of U.S. state constitutional requirements for balanced budgets, were supposed to avoid that necessity.

Sadly, although Germany, like New York, greatly prospers by participating in a huge single continental market, Brussels cannot tax Germany to subsidize Greece's welfare state in the same way Washington taxes New York to subsidize Mississippi's Medicaid. And that is not likely to happen anytime soon.

With all that wealth to itself, Germany provides gold-plated employment security and jobless benefits, short work weeks and the like, portrays itself a model of Euro-efficiency, and lectures Greece on Teutonic frugality.

Germany can only afford those benefits because it doesn't share its wealth with Greece. Athens can't scale back social benefits to truly affordable levels, without political upheaval, because its population does not understand why they can't enjoy the same perks as Germans.

The International Monetary Fund is telling Spain to radically overhaul labor laws, pensions and other social benefits or become the next Greece. Unfortunately, the less wealthy European countries cannot coexist in the eurozone with wealthier profligate states like Denmark, German and France -- domestic politics won't allow it -- and the rich states cannot perpetuate the fantasy that they pay for the benefits through their own productivity alone if the poorer ones spin off.

Once upon a time, the European Economic Community -- remember that quaint post-World War II institution? -- thrived without a single currency. A larger European Union can thrive again, but it needs to jettison the fantasy that the benefits of capitalism can be accomplished without adequate incentives to work hard and invest.

Free-market capitalism is the greatest engine of progress conceived by man -- unless, of course, it was divine inspiration -- but it cannot survive with the heresy that the benefits of capitalism can be accomplished without both risks and rewards.

Email ThisBlogThis!Share to TwitterShare to FacebookShare to Pinterest
Labels: euro