Why You Should Bet Against The Dollar

In the face of a relatively new bull market in the US dollar, contrarian investors may want to consider the effect of the last extreme dollar bull market. Given that the systemic problems in the US economy continue, especially compared with the much milder challenges in Europe and Japan, gold, which has continued to rise in value, appears to be an attractive contrarian play against the dollar. See the following post from Expected Returns.

There's nothing I love more than being a contrarian when sentiment reaches extreme levels. In the case of the dollar, extreme dollar bullishness amongst investors is signalling a potential turn. This is obviously very bullish for gold, which is off only 8% from the inception of the power dollar rally. From Bloomberg:

Investors are the most bullish on the dollar since the collapse of Lehman Brothers Holdings Inc. on speculation the U.S. economy will expand at a faster pace than in Europe and Japan, a survey of Bloomberg users showed.

The world’s reserve currency will rise over the next six months, according to respondents in the Bloomberg Professional Global Confidence Index. Sentiment toward the U.S. economy rose among the 1,612 participants in the survey, even as the outlook for global growth fell for a second consecutive month.

The dollar strengthened this month to the most since May against the euro on concern Greece’s struggles to close the biggest deficit in the European Union as a percentage of gross domestic product will weigh on the region. The Federal Reserve will raise interest rates before the European Central Bank and Bank of Japan, according to the median estimate of more than 30 economists surveyed by Bloomberg.

The high for the index was the 68.86 reading in September 2008, when Lehman’s bankruptcy drove investors to the dollar as a refuge. The Bloomberg Correlation-Weighted Index for the dollar rose the next two months.

The dollar rallied quite powerfully from 76 to 88 on the dollar index over a 6- month period. As most of you will recall, September 2008 was a very volatile period in markets when companies were falling left and right. "Safety" became paramount, which to investors meant buying U.S. dollars.

The subsequent multi-month decline in the dollar made clear that the structural issues of the dollar haven't been resolved. 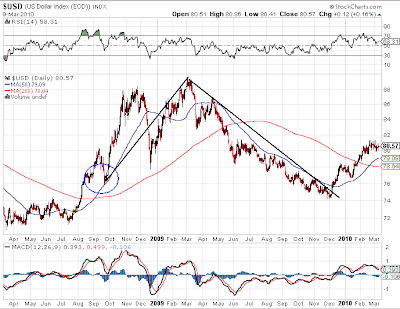 Now let's see what gold in this time frame. Since bottoming in September 2008, gold rose about 50% into March 2009, rising along with the dollar. Keep in mind that the stock market and real estate were getting crushed into March 2009.

Gold lived up to its historic role as a safe haven during the worst of this ongoing crisis. However, unlike the dollar, gold continued to rise into 2010. 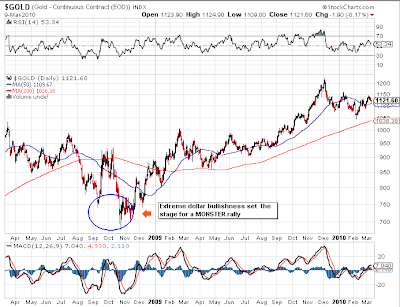 The dollar has been touted recently as a safe haven from the problems of the Eurozone. Since the debt problems in Greece are so huge, the Euro has been described as a currency to avoid. After all, Greece accounts for a staggering 2% of the European Union's GDP.

In contrast, the bankrupt state of California accounts for over 13% of America's GDP. New York just recently announced increased borrowing and draconian cuts to plug their huge budget gaps. How can the dollar be a safe haven with these structural fiscal problems from our largest states? Well it's not. The media has simply been successful in creating a convenient red herring.

There will be a time in the next few years when the volatility in the dollar and gold shocks people. We have been shoving the debt problem in America aside for far too long, and the day of reckoning is approaching.