Rising Debt to GDP Poses Risk To US Creditworthiness

In a recent statement, Moody's Investors Service, one of the leading bond rating agencies, offered a sobering reminder that the United States' AAA bond rating could be in jeopardy in the future. The increasing level of US debt as a percentage of GDP, coupled with the continuing decline in foreign purchasing of US debt instruments, increases the chances of eventual default. See the following post by Moses Kim from Expected Returns for more on this.

t default in America, implicit or explicit, is one of the more obvious things that will happen in the years ahead. I honestly don't think calling for a U.S. debt default is radical- it literally happens all the time, especially following banking crises. Smart investors are trying to figure out how to protect themselves from a coming default; foolish investors are sticking their heads in the sand, just as they always do. From the New York Times, Moody's Warns U.S. Debt Could Test Triple-A Rating:

The gold-plated credit rating of the United States — an article of faith across America and, indeed, around the world — may be at risk in coming years as the nation copes with its growing debts.

That sobering assessment, issued Monday by Moody’s Investors Service, provided a reminder that even Aaa-rated United States Treasury bonds, supposedly the safest of safe investments, could be downgraded one day if Washington failed to manage the federal debt.

Well said. The AAA rating of the U.S. is an article of faith, not logic or facts. There is no law that states that those on top remain on top. In fact, the world seems to be governed by a universal law that guarantees those on top do idiotic things that undermine their country. America is no different. 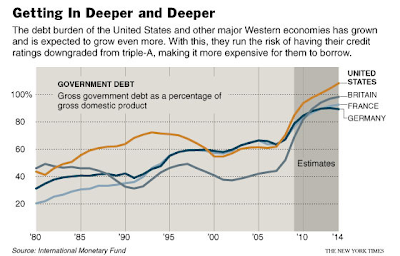 A downgrade would affect more than American pride. The bigger risk would be to the country’s ability to keep borrowing money on extremely favorable terms, and therefore to keep spending more money than it takes in from tax revenue.

A credit rating lets lenders and investors know how likely it is that a borrower can pay back a loan. A sterling rating means there is little for lenders to worry about. A lower one typically results in bond investors demanding higher interest rates on debt.

Those higher rates, in turn, add to the country’s overall debt burden and can force the government to reduce spending, increase taxes or both. That difficulty has been well-illustrated recently in Greece and Portugal, with strikes and protests as citizens march in the streets to oppose tough austerity measures that directly reduce entitlements and state benefits.

Without question, foreigners are trying to figure out how to unload their debt at the best possible price. China, the largest investor in U.S. Treasuries, continues to reduce their holdings of U.S. debt. The waning demand from foreigners can only be balanced by direct government monetization (inflation). Our government officials will downplay the risks to monetization and claim that falling demand for our debt is a minor issue since we can "grow" our way out of this debt crisis.

I'm sorry to ruin the party, but we're not growing our way out of anything, especially since this growth will be induced by government spending. Government spending has taken on a mythical quality as something that has helped us avert a Depression. Economists will have you believe the miracle (read: delusion ) known as the Keynesian multiplier effect will allow our economy to magically grow at a torrid pace to infinity- all we have to do is print money and spend it!

This is just plain fiction. Using housing as an example, I'll try to simply explain why government intervention does not work in the real world.

The government is heavily subsidizing the housing market through its various programs. There is no doubt the government has been successful in subduing mortgage rates, most notably through its direct purchases of agency debt. Curious minds will be asking why historically low mortgage rates coupled with heavily discounted prices are not having a measurable effect on housing. The simple answer is because these artificial mortgage rates are not a reflection of true market conditions (i.e. inflation, organic demand for bonds etc.). This means that loans at this level are simply unprofitable for banks. Think about it: by government decree, mortgage rates can be brought down to 0%. But what bank in their right mind would lend in that environment, and what knowledgeable investor would invest when the rules of the game are constantly changing?

Our government officials, who have no idea how the real world works, believe our economy is so simple that if you just tweak one input you will get a measurable output. You are seeing in real-time that this is not the case. Our economy is getting immeasurably worse due to foolhardy government intervention, and I have little hope that this will change.

To close, here's Peter Schiff on CNBC talking about the crisis in U.S. government debt. It's always a joy to hear some of the nonsense spoken by CNBC anchors.