The Great Contraction In Credit Is Hurting Small Business

The inability for small business to tap the credit markets is playing a significant role in the continuation of the recession. This problem is likely to remain until a number of smaller banks, who have traditionally served the small business sector, work out the bad debt that is still carried on their books. See the following post from Expected Returns.

While our government continues to borrow at a torrid pace to keep this house of cards from collapsing, small businesses and average consumers are experiencing a tight credit environment. This trend must reverse or there is no way we will find our way out of this recession. From the WSJ, Lending Squeeze Thwarts Small-Business Rebound:

For a recovery to take hold, hundreds of thousands of small businesses must find the confidence to expand and create jobs. But when they get to that point, the local banks they depend on—worried about borrowers' financial strength, scrutinized by regulators and slammed by souring real-estate loans—might not be willing or able to provide the credit they need.

While big companies have been able to borrow in bond markets, smaller companies rely mainly on bank credit, which has been shrinking. In 2009, total lending by U.S. banks fell 7.4%, the steepest drop since 1942. In all, the credit pulled out of the economy by banks since the downfall of Lehman Brothers in September 2008 amounts to about $700 billion, more than double the amount so far distributed under President Barack Obama's $787 billion stimulus program.

Small businesses are no doubt feeling the effects of the unprecedented contraction in credit. However, perhaps more telling is the lackluster consumer demand that is justifying the tightness in credit. If small businesses were bringing in robust profits, banks would be lining up to offer them credit.

Getting banks to lend more won't be easy, given the rising tide of defaults on loans made to finance housing developments, office buildings, shopping malls and other commercial real estate. Deutsche Bank expects banks to suffer at least $250 billion in losses on such loans, with about half coming in the next few years. Together with an estimated $250 billion in further charge-offs on home mortgages, that's more than double banks' current reserves against losses on all types of loans.

The stakes are particularly high for community banks, which tend to be much more active in commercial real estate than their larger counterparts. As of December 2009, such loans comprised about 42% of all loans held by the 7,344 banks with less than $1 billion in assets, compared to about 17% for the hundred or so banks with more than $10 billion in assets.

Banks know something we don't about the toxic waste on their balance sheets. We can infer from their risk aversion that they are sitting on some real lemons that will result in huge losses. From the graph below, you can see that excess reserves are still rising at an unprecedented rate. 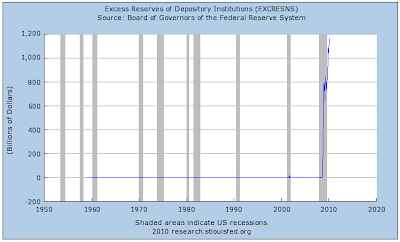 Due to the weakness in commercial real estate, no small number of banks will go under. After 140 bank failures last year, we already have had 30 bank failures in 2010. Expect credit to become tighter in the years ahead.

"It's kind of a vicious cycle," he says. "Anytime you're in an economic environment like we are, bankers are going to be more conservative."

One of bankers' main concerns is the damage the recession has done to many companies' finances. Values of real estate and other things small business owners can put up as collateral for loans have fallen so far, so fast, that many businesses have little to offer. Also, a year or more of losses have eroded the value of owners' stakes in companies, leaving less of a cushion against bankruptcy.

There are really only two types of economies- those that are growing, and those that are contracting. A contracting credit environment induced by falling asset values used as collateral is evidence of the latter. These types of negative feedback loops are hard to reverse, which explains why the economy remains so weak even with an endless supply of government stimulus.

The government's attempt to stimulate the economy at the small business level has been an abject failure. Ultimately, small businesses will recover when there is an increase in real demand. This will take some time since so many Americans are unemployed, and those that are employed are focused on paying off debt. Our economic leaders must come to grips with the fact that the great secular expansion in credit has turned into a mammoth contraction in credit. These contractions take decades to play out- just take a look at Japan.