What Could Cause A US Default On Its Debt

Once thought an impossibility, the default of the United States on its debt is now being talked about as a potential outcome. Moses Kim points to corruption, a collapse of confidence, and overvaluation of the dollar as problems that could lead to a US default. See the following from Expected Returns for more on this.

For years, Cassandras have been warning of an economic collapse in America driven by a default on our national debt. Yet amazingly, in the face of accruing liabilities, foreigners have continued to fund the lavish lifestyles of Americans.

While the first wave of defaults is likely to be in the Eurozone, where Maastricht Treaty- mandated debt to GDP ratios of 60% are being dismantled, America is not well on its way to defaulting itself.
Is a sovereign debt default possible in America?

First off, there are a couple of different forms of default. There is the outright default model accompanied by a repudiation of debt, which would be the Revolutionary Russian and Revolutionary Chinese model of default. Then there's the de facto default, which implies inflation.

Sovereign debt defaults are historically characteristic of emerging economies. Since emerging economies tend to be procyclical, economic downturns apply significant pressure to debt servicing ability. Mature economies like the United States are thought to be immune from default.

In the following chart, notice the subtle shift that signifies over-indebtedness is increasingly becoming an advanced economy phenomenon. 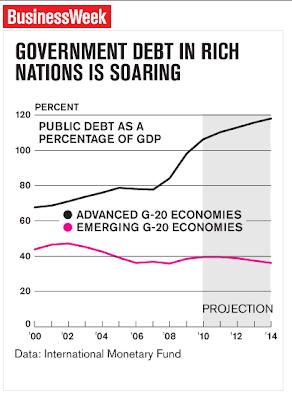 It is certainly true that highly developed economies have a higher tolerance for debt than emerging economies. Heck, even Japan is still chugging along with a debt to GDP ratio approaching 200% (although this is partly offset by their massive foreign exchange reserves). But even accounting for their foreign exchange reserves, Japan is long overdue for some serious credit dislocations.
The Argentinian Model of Debt Default

If you are looking for a wealthy nation to fall victim to repeated debt defaults, look no further than Argentina. Based purely on resources, Argentina should be one of the richest nations in the world. However, Argentina has been susceptible to sovereign debt defaults throughout its history.

What was it about Argentina that made repeated sovereign debt defaults possible, and are these characteristics prevalent in the United States today?
Kleptocracy

The level of corruption at the highest levels of government is reaching comical levels. In the face of rising public opposition, our government has continued to loot Americans and effectively hand the money to banks that gambled and lost.

What tends to happen in Kleptocratic regimes is that huge sovereign debt loads profit the few at the expense of the majority. Let me give you one example.

Senator Christopher Dodd is a shining example of the average corrupt politician that now inhabits Washington D.C. As Chairman of the Senate Finance Committee, Senator Dodd failed to regulate Fannie Mae and Freddie Mac, turning a blind eye to clear fraudulent behavior. I guess it's a coincidence that he received the most campaign contributions from Freddie and Fannie Mae out of any politician.

Our political system is one big joke. Americans caught up in the ridiculous left-right paradigm are seriously missing out on the bigger picture.
Collapse of Confidence

Confidence is a funny thing. The move from long-term to short-term sovereign debt leaves a country more vulnerable to a sudden collapse in confidence by global creditors.

In the United States, the move to shorter-dated securities is well underway. Don't underestimate the ability of capital outflows to turn from a trickle to a flood in short order. The move to short-dated securities is the first step in the process. If our government officials keep on bungling the handling of this crisis, expect capital flows to flood out of the U.S.
Overvalued Currency and Exchange Rates

Overvalued currencies pose a problem for over-indebted countries due to the relationship of the relative strength of a currency and demand for bonds. If a country's currency is declining in value, the value of the country's bonds will fall in unison.

In the period preceding its debt default, the Argentinian peso was pegged to the dollar, which kept the peso artificially overvalued. Eventually, the overvalued peso applied pressure to Argentinian exports and helped push Argentina into a recession.

If the dollar weakens against a basket of currencies, which is effectively inflation, demand for our debt will decline. In the post-gold standard system, there is a strong correlation between rising inflation rates and sovereign debt defaults.
Conclusion

History proves that governments with the biggest armies get away with defaulting on debt. However, the consequences of such a default are significant, especially in the short term. Consider for a moment that 40% of new issues of our debt are being funded directly by our government. In the event of a debt default, that figure would be much closer to 100%, which would result in a massive inflationary spiral.

As a result, rates on all types of loans, most importantly mortgage rates, would rise significantly and severely depress economic activity. Credit booms are followed by credit busts, which directly affects interest rates. This is part of the reason why credit contractions are just different beasts.

The U.S. will likely default on its debt through inflation, and perhaps a restructuring of debt. When this occurs, the timeline for recovery will likely be moved back another 5-10 years.