One area of the economy that isn't improving is foreclosures which are not expected to peak until 2011 by some estimates. More bad news is that delinquencies have reached a new record with nearly 10% of home mortgages behind by at least one payment. See the following post from Expected Returns.

Nearly one in 10 homeowners with mortgages were at least one payment behind in the third quarter, the Mortgage Bankers Association said Thursday.

That is the highest figure since the association began keeping records in 1972. It is up from about one in 14 mortgage holders in the third quarter of 2008.

“Clearly the results are being driven by changes in employment,” Jay Brinkmann, the association’s chief economist, said on a conference call with reporters. Five million more unemployed people over the last year has turned into about two million more overdue loans, he added.

This is what I mean when I say unemployment is a leading indicator for this particular downturn. You just can't compare this recession with previous recessions when this crisis was preceded by parabolic rises in housing prices and household debt levels. This is a debt crisis pure and simple. Debt crises, especially one of our magnitude, do not disappear after 2 years.

The association’s delinquency numbers do not include those who are actually in foreclosure, a figure that also rose sharply, to 4.47 percent of all loans. A year ago, it was 2.97 percent.

It also indicates that foreclosures, instead of peaking with the unemployment rate next year, will be a lagging indicator. The association expects foreclosures to peak in 2011.

The data indicate that borrowers in trouble are no longer just those who took out subprime loans. High-quality prime fixed-rate mortgages now represent the largest share of new foreclosures.

If everyone agrees that the sky was falling last year, and that we were on the brink of another "Great Depression", what do you call it when foreclosures are up 50% from those "depression" levels? In the lexicon of our leaders, it is called economic recovery.

I've mentioned previously that the next threat to residential housing is in the higher-end markets. There is another wave of delinquencies set to hit the market in 2010, and if the Fed loses control over interest rates, look out below. Here is a chart of the coming Option ARM and Prime resets in 2010 and beyond. Get ready for fireworks. 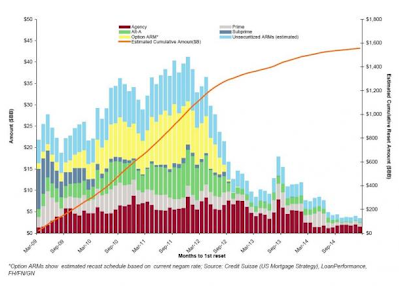