The lack of growth in new construction by homebuilders is not a good sign for the struggling real estate market. The cautious behavior may be attributed to the excess inventory and uncertainty over the possible extension of the homebuyers tax credit. See the following post from The Mess That Greenspan Made.

It appears there was good reason for yesterday's dimming confidence by homebuilders - according to today's report(.pdf) from the Commerce Department, housing starts and permits for new construction have flattened out at severely depressed levels.

Housing starts increased modestly, from an annual rate of 587,000 in August to 590,000 in September, however, the gain would not have occurred if not for a downward revision to the August data from 598,000.

In a way, this is reminiscent of a few years ago when there were huge downward revisions to prior data and, each month, gains would be reported when comparing new unrevised data to previous data that had been revised, all part of a clear and persistent downward trend.

The good news today is that, as shown clearly in the chart above, there's not much room to move down from current levels of home building that are still about 75 percent below the 2005-2006 peak, remaining near all-time lows. From year-ago levels, housing starts are down 28.2 percent. 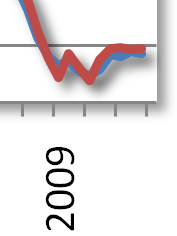 Permits for new construction fell 1.2 percent in September, from an annual rate of 580,000 to 573,000 and as is the case for housing starts, have clearly flatlined over the last five months, a point that should be quite clear to see in the enhanced image to the right from the larger graphic above.

While this is not necessarily bad news for the housing market in general since, if there's one thing that we don't need right now it's more housing inventory coming onto the market, it is certainly not an indication of a resumption to more normal levels of residential construction that would create a few jobs and boost economic growth.

The downward revisions to previous data and the fact that permits - a leading indicator for new home construction - appear to be weaker than housing starts do not bode well for a sustainable rebound in this sector.

It's no wonder that home builders are clamoring for an extension and expansion of the home buyers' tax credit that, according to news this morning, has had more than its share of fraud.

Somehow, just throwing money at the bursting housing bubble doesn't seem to be fixing it...

This post has been republished from Tim Iacono's blog, The Mess That Greenspan Made.
Posted by: Economist's View @ 6:00 AM