David Altig argues that alleged errors by the Fed in setting the federal funds rate are not responsible for the financial crisis. He points out that the Fed was following the same model for setting rates that had proven successful in the 80's and 90's. See the following post from Economist's View for more on this.

David Altig says "it is yet far from clear that the financial crisis can be explained by a misstep in the setting of the federal funds rate" due to a failure to base monetary policy rules on models that include a well developed credit channel:

Reviewing the recession: Was monetary policy to blame?, by David Altig: In a recent speech given at the University of South Alabama, Federal Reserve Bank of Atlanta President Dennis Lockhart added his voice to what is now the general consensus: "I agree with all who are declaring that a technical recovery is under way."

There is still much work to be done, of course, not least the continuing examination of just what led to the recession and how a repeat performance can be avoided. One theme of this examination appeared in last week's Financial Times:

"It is certainly true that the most recent bubble, its bursting and the Fed's actions in the aftermath have inspired existing critics and recruited new ones. The first charge is that interest rates under Alan Greenspan, [current Fed Chairman Ben] Bernanke's predecessor, were kept too low for too long, contributing to a bubble of easy credit."

Here is an exercise that that I find intriguing. Suppose we try to estimate, as closely as we can, the actual interest rate decisions of the Federal Open Market Committee (FOMC) over the period spanning the beginning of Greenspan's tenure to the present. It turns out that by using an approach based not only on measures of inflation and actual output relative to potential but also on the lagged fed funds rate, you can actually get pretty darn close to statistically describing what the FOMC did: 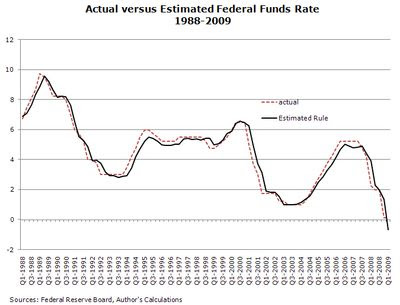 I'm going to resist the temptation to call this approach a "Taylor rule." The estimating "rule" used here does in fact include realizations of inflation and a measure of the output gap (that is, a measure of how different gross domestic product is from its potential). These are the essential ingredients of the Taylor rule, but not the source of the close fit evident in the chart above. Over the period covered by the chart, you could have done a pretty good job mimicking the actual federal funds rate outcomes in any given month using knowledge of the previous month's rate. (If you are interested in the details of the estimating rule, you can find them here.)

The interpretation of the tendency for today's federal funds rate to generally follow yesterday's rate—sometimes referred to as interest rate smoothing—is controversial. Glenn Rudebusch (from the Federal Reserve Bank of San Francisco) explains:

"Many interpret estimated monetary policy rules as suggesting that central banks conduct very sluggish partial adjustment of short-term policy interest rates. In contrast, others argue that this appearance of policy inertia is an illusion and simply reflects the spurious omission of important persistent influences on the actual setting of policy."

Rudebusch is decidedly in the second camp, but for our purposes here the exact interpretation may not be that important. Though I am glossing over some not insignificant caveats—such as the difference between final data and the information the FOMC had to react to in real time—the chart above suggests that whatever the underlying structure of policy decisions, after the fact the FOMC appears to have behaved in an extraordinarily consistent way over the period extending from the late 1980s. This observation, in turn, suggests to me that there was nothing all that unusual about monetary policy in 2003 once you account for the state of the economy.

Which leads me to my main point on the chart above: If you are of the opinion that interest rate policy was good through the late 1980s and 1990s, then there seems to be a good case the FOMC was just sticking with "proven" success as it set interest rates through the dawning of the new millennium.

There is, of course, the possibility that the pattern of the funds rate depicted in the chart above was incomplete all along in the sense that whatever variables are explicit and implicit in the estimated rule, they did not include information to which the FOMC should have responded. In calmer times, the story would go, not including potentially pertinent information was not much of a problem. Eventually the missing-data chickens could come home to roost. The prime omitted variable suspect would, of course, be some sort of asset prices.

Scratch any gathering of macroeconomists these days and out will bleed a steady stream directed at incorporating credit and financial market activity into thinking about the aggregate economy. The necessity of proceeding with that work was emphasized by no less an authority than Don Kohn, vice chairman of the Federal Reserve Board of Governors, speaking at just such a gathering of macroeconomists last week:

"It is fair to say, however, that the core macroeconomic modeling framework used at the Federal Reserve and other central banks around the world has included, at best, only a limited role for the balance sheets of households and firms, credit provision, and financial intermediation. The features suggested by the literature on the role of credit in the transmission of policy have not yet become prominent ingredients in models used at central banks or in much academic research."

I will admit that economists were not exactly ahead of the curve with this agenda, but prior to 2007 it was not at all clear that detailed descriptions of how funds moved from lenders to borrowers or how short-term interest rates are transmitted to longer-term interest rates and capital accumulation decisions were crucial to getting monetary policy right. Models without such detail tended to deliver policy decisions not far from the sort depicted above, and, as I noted, they seemed to be working quite well in terms of macroeconomic outcomes.

Thus far, one of the lessons from models in which financial intermediation is taken seriously is that interest rate spreads or stock prices or other asset prices do become part of the policy rate recipe. Your response might well be something along the lines of "duh." You are entitled to that opinion, and I won't push back too hard. But it is yet far from clear that the financial crisis can be explained by a misstep in the setting of the federal funds rate caused by the failure to make whatever adjustments might have been indicated by the inclusion of pertinent financial variables in implicit rate-setting rules of thumb. Furthermore, early versions of research I have seen that combines capital regulation policy and interest rate policy suggest that the macroeconomic consequences of getting the former wrong may be much greater than the consequences of getting the latter wrong. To me, that conclusion has the ring of truth.

I have advocated targeting a price index that includes asset prices as part of the policy rule, but I share the view that this likely would not have been enough by itself to stop the crisis from occurring. Targeting a broader price index might have tempered the downturn some, or even quite a bit -- it sounds like I am more optimistic than David along about how well this might work -- but changes in regulation must be an essential component of reform if we are going to prevent problems from reoccurring in the future.

However, I think that not having models with detailed descriptions of the credit transmission mechanism was costly. The New Keynesian model that is used to inform monetary policy decisions relies upon wage and price rigidities to explain how changes in monetary policy and/or financial market conditions are transmitted to the broader economy. Thus, the price/wage rigidity transmission channels must serve as a proxy for the effects that work through credit (or other) channels, and it is not evident to me that they are adequate proxies for this task (e.g. what would a government spending multiplier look like within a model that had a richer set of connections between financial markets and the real economy?). Whether or not having such models would have prevented the crisis is an open question, and I won't push back too hard against David's view of this, but not having such models once this crisis hit did, I think, make it more difficult for us to evaluate the appropriate policy response. Not having the models we needed led to uncertainty from policymakers that showed up in the seemingly, if not actual ad hoc and trial and error nature of many of the policy responses.