So What Is The Fed's Next Move?

With the growing number of positive economic reports coming out, many people are questioning whether the economy has turned a corner. Have we really turned a corner, though, or are we seeing a temporary upswing? The Federal Reserve is playing a difficult game right now. If they leave rates low too long we could be faced with inflation, but if they raise them too quickly it could hamper the recovery. With this in mind, the Fed has some challenging decisions ahead of them. How are they going to respond? Mark Thoma looks at a recent article from Tim Duy that addresses this in his blog post below.

Turning Which Corner, by Tim Duy: Is the economy turning a corner? And, if so, which corner is it turning? In my view, economic activity has been influenced by two separate trends since 2007. One is the structural response to an over-leveraged household sector that pushed the US economy into what was initially a mild recession. The second trend is the sharp cyclical recession that began in earnest in the second half of 2008 as the commodity price shock decimated already weakened households and the deepening credit crunch cut financing for a broad swath of firms. Excess capacity emerged throughout the economy, triggering the familiar phenomenon of rising unemployment. Difficult though they may be, the cyclical dynamics do not last indefinitely - generally speaking, output declines stop well short of zero GDP and unemployment will not rise to 100%. Market participants are rightly anticipating the economy is turning the corner on the cyclical trend. But I suspect we have a long path ahead of us on the structural challenge poised by overleveraged households - suggesting that the green shoots we hear so much about will yield little more than stunted growth. This is why Bernanke and Co. are more likely to fertilize the fields than plan for the next harvest.

If there is one picture that sums up the cyclical story of the past year, it is the path of real consumption: 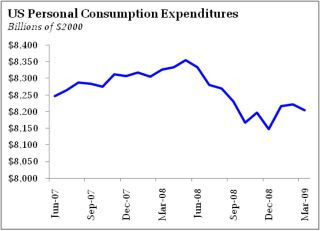 The sharp deceleration has come to an end, of that there can be little doubt. Nor should there be much surprise. The collapse in commodity prices, lower interest rates to allow mortgage refinancing for those homeowners still above water, and tax cuts all joined to provide powerful support for household budgets allowing consumption to stabilize despite the massive job losses experienced in recent months. The stabilization in consumer demand will eventually slow the pace of job cuts. Indeed, this is already evident in the data - analysts have pointed topeak of initial claims as a key hurdle in the race to recovery. To be sure, it is difficult if not impossible to characterize the data flow as "good." But it is certainly less "bad." The path to Great Depression II has hit something of a speedbump. And seeing that, market participants have priced out some of the most cataclysmic scenarios, supporting equities and commodities while pushing bond yields higher.

There will be more opportunities for euphoria - do not underestimate the power of pent-up demand to trigger bursts of positive data. There is a portion of the population who are not credit constrained, biding their time for the perfect moment to buy a new car or schedule a vacation. Indeed, such bursts of data are more likely than not following a sharp decline in activity (the 2.2% gain in consumption spending in 1Q09 is such an example). I believe, however, that those bursts of data will not be sustainable. Far from it - at a minimum, the ability of households to carry activity forward is at its end, which by itself would leave the economy floundering .

I think it is difficult to ignore the implications of the growth of consumer dominance in defining patterns of economic activity: 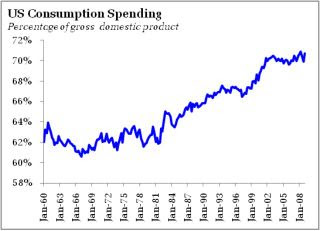 The story of the last 25 years has been an increasing role for household spending, rising to perhaps a peak of conspicuous consumption, with the motto "a filet mignon in every stainless steel oven, a RV in every garage." Patterns of economic development - more to the point, capital formation - have favored taking advantage of this trend. Countless business plans are based on the expectation that this trend will continue. The baby boomers have endless wealth (not so anymore, if it ever was), there is a never ending supply of equity rich Californians to support our [insert locality] housing market, etc. Those plans will be stressed, to say the least, if the trend stalls. The implications for a reversal are even more significant. And for those that believe reversal is necessary, note that the reversal has really not even begun. What took 25 years to build may take another 25 years to destroy.

How sure are we that the trend is at an end? My thought is that the factors that supported the trend - a steady march down in the saving rate to zero and a steady march up in household debt, coupled with monetary policy that had room to go from 15% short rates to zero over nearly three decades, are at an end. Even if you believe that savings rates will not rise to 12%, the inability to sustain below zero rates puts a limit on household spending growth (as well as debt accumulation). And with underwriting conditions tightening - a permanent tightening, given the changing regulatory environment - the role of debt financing in the life of the consumer is sure to stagnate.

The challenge then is to transition the economy away from the debt-supported consumption trend that looks no longer viable to a trend more reliant on investment and external spending. This, however, is easier said then done. How quickly can 25 years of growth directed at consumer spending be reversed? And reversed to what, especially if the rest of the world continues to struggle? I see little hope of an "immaculate conception" of a fresh, sustainable pattern of economic activity. Until the transition path reveals itself, fiscal policy will be necessary to fill the economic hole likely to exist if the savings proclivities of households continue to exceed the investment intentions of firms.

Ironically, the "best" road to growth is also the riskiest from a policy perspective - a rapid expansion of emerging market activity. Such an expansion, however, would once again place the US in competition for global resources, and threaten a reversal of the commodity and interest rate trends that have been so important to supporting US consumers. Indeed, just the whiff of recovery has supported oil prices, promising an abrupt end to one of the factors supporting US consumers. In the worst case scenario, a flight of capital away from the Dollar (in response to more promising investments abroad) would generate an inflationary and structural shock that would leave the Fed juggling between renewed recession and higher inflation. In short, the optimal external shock would be one only partially supportive; anything more would push the globe to a revisiting of the commodity price surge of early 2008. Looking for a decoupling story now, however, seems like almost a naïve dream.

What is the Fed's next move? One email crossed my inbox after the April employment report suggested some thinking that the Fed could hike rates as early as November. Such a scenario (absent a stability threatening run on the Dollar) must come from a spectacularly optimistic take on incoming data. Data, I might add, that is a reflection of the massive crutch provided by the Federal Reserve and US Treasury, not necessarily a sea change in the underlying economic environment. Look too how quickly bond rates began to climb after the Fed declined to expand Treasury purchases at the last FOMC meeting. More generally, consider this tidbit on Federal Reserve Chairman Ben Bernanke's thinking back in 2003:

The 2003 FOMC transcripts showed then-Governor Ben Bernanke very tuned into financial markets as he pressed for earlier release of Fed forecasts and a willingness to lower interest rates to zero.
From the June 2003 FOMC meeting, when the Fed lowered the target fed funds rate to 1%:

“I wonder if you might give some thought to whether or not it would make sense tactically to say publicly that we are willing to lower the federal funds rate to zero if necessary…I think it would have a beneficial effect on expectations in that there would no longer be a feeling in the market that we had reached the end of our rope.”

“It’s extremely important that we do what we can to maintain the supportive configuration in financial markets. That means continuing our easy monetary policy and, even more important, using our statement to signal our willingness to keep policy easy so long as there is a risk of further disinflation and continuing economic weakness."

A year and a half after the end of the 2001 recession, Bernanke was looking at the possibility of lowering rates to zero in order to maintain support for financial markets. And comparatively, financial markets were leaps and bounds healthier in 2003 than now. Is a rate hike really feasible this year - or even next - given the current state of dependence of the financial system on government largess? Moreover, consider the disinflation worries in 2003 and fast forward to last week:

Even after a recovery gets under way, the rate of growth of real economic activity is likely to remain below its longer-run potential for a while, implying that the current slack in resource utilization will increase further. We expect that the recovery will only gradually gain momentum and that economic slack will diminish slowly. In particular, businesses are likely to be cautious about hiring, implying that the unemployment rate could remain high for a time, even after economic growth resumes.

In this environment, we anticipate that inflation will remain low. Indeed, given the sizable margin of slack in resource utilization and diminished cost pressures from oil and other commodities, inflation is likely to move down some over the next year relative to its pace in 2008. However, inflation expectations, as measured by various household and business surveys, appear to have remained relatively stable, which should limit further declines in inflation.

Now consider the output gap over the last decade: 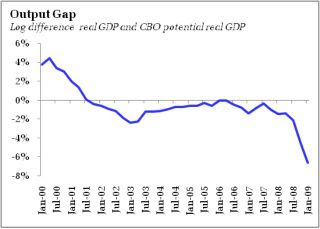 The current gap already far exceeds that of the last disinflationary scare, and Bernanke expects it to continue to expand further, and then diminish only gradually. As long as the gap continues to expand, Bernanke's bias will be in favor of additional easing. The only question is whether he remains content to allow TALF funds to slowly trickle into the economy, or speeds the pace of policy with expansions of longer dated Treasury purchases. Given Bernanke's past behavior, expecting patience on his part seems unrealistic. Moreover, the last jobs report provides less room for optimism than observers suggest. Importantly, Jim Hamilton notes the decline in hours worked appears unabated; threat of a currency collapse aside, there will be no policy tightening, only easing, until hours worked moves unquestionably and sustainably in a positive trajectory.

Bottom Line: The economy looks to be turning a corner relative to the downward cyclical force of last year. But this is only a partial victory, as the factors that that started us down this path - namely, a debt-supported consumer spending dynamic - remain in play, and will likely remain in play for years, arguing for a long period of slow growth, punctuated by short-lived bursts of positive data. In such an environment, and considering the importance of government support to sustain financial stability, the odds favor continued policy easing. Those looking for a more positive scenario are pinning their hopes on either an unlikely rapid return to past patterns of consumer behavior, an unlikely rapid evolution in patterns of economic activity that are not consumer dependent, or a decoupling of emerging market economic activity from the US (which could pose a different set of policy challenges).