We have been hearing a lot about deflation here in the U.S., but so far we have been able to hold it off for the most part. It appears that Europe is not having as much luck though. Deflation can be an economic killer as we saw during the Great Depression and more recently with Japan's Lost Decade. For more on this, read the following blog post from Tim Iacono.

Spain, the U.K., Luxembourg, Portugal, Ireland - who's next to succumb to the scourge of deflation? Yesterday, the New York Times reported that Spanish merchants have been slashing prices with abandon, auguring in the possibility of a dreaded "deflation death spiral". 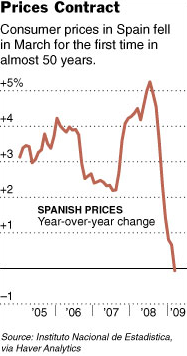 Prices dipped everywhere, from restaurants and fashion retailers to pharmacies and supermarkets in March.
...
With the combination of rising unemployment and falling prices, economists fear Spain may be in the early grip of deflation, a hallmark of both the Great Depression and Japan’s lost decade of the 1990s, and a major concern since the financial crisis went global last year.

Deflation can result in a downward spiral that can be difficult to reverse. As unemployment rises sharply and consumers cut spending, companies cut prices. But if sales do not pick up, then revenue can decline further, forcing more cuts in workers or wages.

Once again, falling prices are characterized as the potential source of much bigger problems ahead, as if the world had something even remotely close to "sound money" where currency maintained its value over long periods of time as it did in the U.S. prior to the creation of the Federal Reserve in 1913.

To review -- in the hundred years prior to the Fed, inflation rounded to zero, whereas, in the nearly hundred years since 1913, the U.S. dollar has lost 96 percent of its value.

Policies that have resulted in this loss of value, now accepted as conventional wisdom by central bankers around the world, make real deflation (the minus 10 to 15 percent per year variety, not the -0.1 percent Spanish version) a near impossibility today.

But, that doesn't stop dimwitted dismal scientists from looking there instead of at the bursting of the biggest asset bubble in the history of Mankind when identifying villains in the current economic and financial market maelstrom.

“It doesn’t mean it will spread here to the U.S., but we need to look closely at Spain and other places to understand the dynamic,” says Simon Johnson, a professor at the Sloan School of Management at the Massachusetts Institute of Technology and a former chief economist for the International Monetary Fund. “It’s like the front line of a new virus outbreak.”

If only economists would spend more time examining how they failed the world so miserably over the last few years instead of at a 19th century phenomenon, we'd all be better off.

In the U.K. too there is much gnashing of teeth where annual deflation is running at a whopping four times the rate now experienced to the south - minus 0.4 percent.

The funniest thing about English deflation is that it is, in large part, directly caused by central bank actions. The broadest measure of consumer prices includes mortgage costs, the vast majority of which are variable rate loans, and, as short-term rates have been slashed, these consumer costs have tumbled as detailed in this report in the Telegraph.

The Retail Prices Index (RPI) measure of inflation fell to -0.4pc in March, indicating that prices paid by consumers last month were lower than a year ago - a trend not seen since March 1960.

RPI inflation, which includes housing and mortgage costs, has been driven down by the the series of aggressive interest rate cuts from the Bank of England which have triggered lower variable rate mortgage repayments .
...
The economy is expected to remain in deflationary territory for many months, which will mean pensioners will receive the lowest possible increase of 2.5pc next year, adding just £2.40 to the full weekly pension, an amount criticized as "derisory and pathetic" by campaigners.

If health care costs in the U.K. are anything like those in the U.S., there are probably a lot of irate senior citizens.

A related story explains why we should all be fearful about deflation beginning with the moronic example of how, after television prices have been falling for the last 20 years, additional price declines will cause consumers to think twice. Really!?

1. It causes consumers and businesses to feel concerned about spending. Why buy that £400 television this week when you are confident it will be cut in price to £350 next month? The same applies to businesses – why invest in new machinery, or software when you think it will fall in price? Deflation can, if it becomes entrenched, cause the whole economy to grind to a halt.

2. Deflation causes wage cuts. Employers can argue that they do not need to give their staff a pay rise, because their staff can buy more goods with the same salary. Many companies are freezing pay and started cutting wages in some cases.

3. In theory, falling wages should not matter if the price of goods and services fall as well. But in practice it is very damaging psychologically. People paid £30,000 one year do not like being paid £29,000 the following year even if they can buy the same amount of goods. Everyone feels less wealthy, especially home owners whose main asset is falling in price. And when they feel less wealthy, they spend less, causing a vicious downward spiral in the economy.

4. Deflation causes the value of people's debts to mount. A £100,000 mortgage might cost £4,000 to service each year, but the value of the house could fall by £4,000 or more – a dispiriting experience, but you will still need to keep on servicing the debt.

Wage cuts, tumbling asset prices, and making debt service more expensive are all legitimate arguments but falling consumer prices really don't belong in this discussion unless it's something more than volatile energy prices and, in the case of the U.K.-style deflation, lower interest rates caused by the central banks that, ironically, are desperately trying to avoid seeing consumer prices move lower.

For a more complete discussion on this subject, see Seven key points on deflation or the many other items categorized under "deflation" at this blog.