Do You Believe Alan Greenspan?

Former Federal Reserve chief, Alan Greenspan, is towards the top of most people's lists for who had the biggest part in the creation of the current financial crisis. Ask Greenspan, though, and he'll tell you that he had nothing to do with it. Tim Iacono calls Greenspan out on this claim, and takes a deeper look into the origin of the financial crisis in his blog post below.

On the same day that his successor signaled dramatic policy changes that would see the Federal Reserve "take away the punchbowl" before inflating yet another asset bubble, radically altering the way financial market regulators operate in the process, former Fed chairman Alan Greenspan was readying yet another in a long series of op-ed pieces aimed at defending his legacy.

He didn't cause the housing bubble, or so he says.

After yesterday's commentary by David Leonhardt at the New York Times about how the central bank had been played like a fiddle by big financial firms who took on "excessive risk" knowing that the government would be there to bail them out, you'd have thought that maybe there would be some reluctance to go forward with the editorial.

Still seemingly unfamiliar with the concept of "moral hazard" where, in the words of Mr. Leonhardt, big firms can "act as if their future losses are indeed somebody else’s problem", and having only confessed to being "shocked" last year after finding a flaw in his ideological framework about how "self-interest" works in the real world, the opinion piece made it into the Wall Street Journal this morning.

After a long period of relative silence since the wheels fell off the global economy last fall and as his critics grew in number, his name often cited in public opinion polls as "the one individual" most responsible for the current mess (this term, admittedly, now failing to adequately describe the extent of the problems the world now faces), his defense has become defiant, if not desperate, the most recent example being provided today:

The Fed Didn't Cause the Housing Bubble
Any new regulations should help direct savings toward productive investments.
By ALAN GREENSPAN

We are in the midst of a global crisis that will unquestionably rank as the most virulent since the 1930s. It will eventually subside and pass into history. But how the interacting and reinforcing causes and effects of this severe contraction are interpreted will shape the reconfiguration of our currently disabled global financial system. 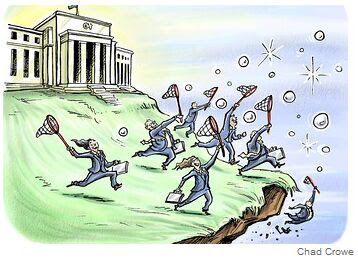 There are at least two broad and competing explanations of the origins of this crisis. The first is that the "easy money" policies of the Federal Reserve produced the U.S. housing bubble that is at the core of today's financial mess.

The second, and far more credible, explanation agrees that it was indeed lower interest rates that spawned the speculative euphoria. However, the interest rate that mattered was not the federal-funds rate, but the rate on long-term, fixed-rate mortgages.

Not surprisingly, the "easy money" thesis is dismissed out of hand - there is nothing further about fostering a culture of debt or being overly accommodating to the slightest of financial market stumbles over a period of almost two decades, all of which surely contributed to the prevailing attitudes and conventional wisdom of just a few years ago.

Having dispensed with that, it is on to the now-familiar, "I was powerless to do anything about long-term rates" retort, as if long-term rates really played a key role in the housing bubble during its bubbliest years.

With prices having risen to nosebleed levels during the middle of the decade, who could afford to buy a house with a 30-year fixed loan?

It was the tsunami of "innovation" in financial products - Pay Option ARMs, "liar loans", MBSs, CDOs, and CDSs - all of which were blessed by the central bank, that caused nearly all the damage, not 30-year fixed mortgages.

Next comes the "savings glut" rationale for why long-term rates were such a conundrum followed by the now-familiar, "our housing bubble was just average" angle:

That decline in long-term interest rates across a wide spectrum of countries statistically explains, and is the most likely major cause of, real-estate capitalization rates that declined and converged across the globe, resulting in the global housing price bubble. (The U.S. price bubble was at, or below, the median according to the International Monetary Fund.)

What follows is a rebuke of Stanford University Professor John Taylor' revisionist history (apparently, it takes one to know one) in which short-term interest rates were cited as the proximal cause for the current meltdown.

And after that, it's always handy to cite glowing criticism from someone who died back in 2006, before it became widely known just how bad things would get.

Given the decoupling of monetary policy from long-term mortgage rates, accelerating the path of monetary tightening that the Fed pursued in 2004-2005 could not have "prevented" the housing bubble. All things considered, I personally prefer Milton Friedman's performance appraisal of the Federal Reserve. In evaluating the period of 1987 to 2005, he wrote on this page in early 2006: "There is no other period of comparable length in which the Federal Reserve System has performed so well. It is more than a difference of degree; it approaches a difference of kind."

That's just pathetic when you think about it...

Even after the recent admonishment from the late Milton Friedman's long-time partner Anna Schwartz as documented in "A 92-year old finger pointed squarely at the Fed", he has the chutzpah to cite favorable words from 2006.

Lastly, the question of regulation and the lack of sophistication.

It is now very clear that the levels of complexity to which market practitioners at the height of their euphoria tried to push risk-management techniques and products were too much for even the most sophisticated market players to handle properly and prudently.

However, the appropriate policy response is not to bridle financial intermediation with heavy regulation. That would stifle important advances in finance that enhance standards of living.

Before getting to the big finale, it's worth noting that the book has not yet been written on these "enhanced standards of living". It seems that standards of living in most of the world, particularly in the U.S., are one big moving target right now, a target that is generally moving in the downward direction.

Come to think of it, "enhanced" is clearly not the right word choice here - it is premature at best and, at worst, it is a sad, almost mocking commentary on the rapidly changing lives of the vast majority of people in the world.

If we are to retain a dynamic world economy capable of producing prosperity and future sustainable growth, we cannot rely on governments to intermediate saving and investment flows. Our challenge in the months ahead will be to install a regulatory regime that will ensure responsible risk management on the part of financial institutions, while encouraging them to continue taking the risks necessary and inherent in any successful market economy.

Maybe what the smartest economists in the world thought was "sustainable growth" wasn't sustainable at all and all that "risk taking" was just a way for bankers to enrich themselves.

People are beginning to sour on the whole idea of "prosperity", that is, if the current economic and financial market tumult is part of the package.