US Inflation Up, Prices Increasing

The U.S. Department of Labor reports a 3.9% annual increase in inflation when including food and energy, with gasoline up 33.2% on the year and food 4.5% more expensive. Clothing costs are also on the rise, despite remaining lower than prices reported two decades ago thanks to inexpensive imports, leaving consumers to deal with price increases in three key purchase areas. Observers note inflation is now at its highest since September 2008, although the central bank reports inflation controls are in place and working. For more on this continue reading the following article from Tim Iacono.

The Labor Department reported that the rising cost of energy products and food drove consumer prices 0.3 percent higher in September and that the annual inflation rate now stands at 3.9 percent, the highest level since September 2008. Paced by a 2.9 percent rise for gasoline, up 33.2 percent on a year-over-year basis, overall energy prices jumped 2.0 percent last month and are now up 19.3 percent from a year ago.

Food & beverage prices rose 0.4 percent in September and are now 4.5 percent higher than last year at this time while the “food at home” subcategory rose 0.6 percent for the third month in a row, now up a stunning 6.3 percent on a year-over-year basis.

Elsewhere, price increases were more moderate and clothing prices reversed their recent trend by dipping 1.1 percent last month, however, apparel prices are still 3.5 percent higher than a year ago, down from the August year-over-year rate of 4.2 percent that marked a 20-year high. 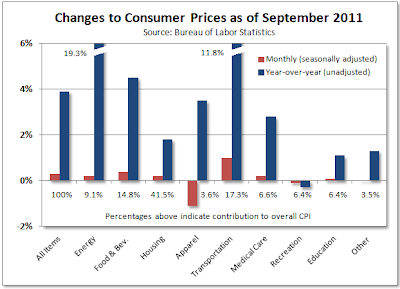 Amazingly, up until this summer, apparel prices had been 10 percent or more below the highs seen in the mid-1990s, this 15-year trend due largely to the rise in inexpensive imports. However, from April to August of this year, apparel prices have surged more than five percent, cutting this gap almost in half. 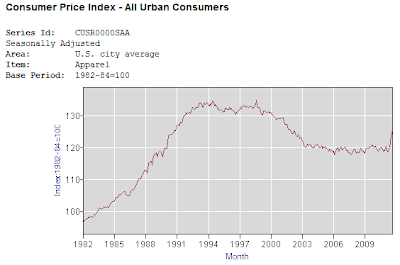 Americans can now add clothing to two other categories where prices have been rising sharply lately – food and energy – as these indispensable items put more pressure on consumers despite assurances from the central bank that inflation is under control.