The Commerce Department has reported that housing starts fell 1.5% and permit applications fell 3.2%. The result is a slow crawl in new home construction that matches the historical three-year low that seems to be the new norm following the housing boom and subsequent recession. Economist Tim Iacono speculates that at the current rate Fannie Mae and Freddie Mac will become a nationwide landlord, collecting titles to foreclosed homes or buying them from struggling banks, with no new homes on the market to offset the balance of power. For more on this continue reading the following article from Tim Iacono.

You’d have to think that, at some point, the Commerce Department is going to lose interest in reporting the monthly housing starts data since, if the graphic below were an EKG, the patient would clearly be dead. Nonetheless, they push on, today’s report(.pdf) indicating that housing starts fell 1.5 percent to an annual rate of 604,000, right around the historically low average level of the last three years since the housing boom went decidedly bust. 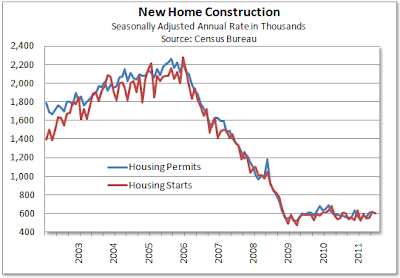 Permits for new construction fell 3.2 percent to an annual rate of 597,000, but, nobody really cares. Of more interest to housing market observers these days is whether wards of the state Fannie Mae and Freddie Mac will continue to exist in their current form and if they might someday soon turn into the nation’s largest landlord, renting out the millions of foreclosed homes that they either already own or will take back in the years ahead.