Inflation is growing in many emerging markets, and a battle is brewing between the US and these countries. The US doesn't seem willing to budge on its current economic path, while the emerging markets are reluctant to allow their currencies to appreciate. Economics Professor, Mark Thoma, takes a closer look at this battle in his blog post below.

Tim Duy notes rising concern about inflation from hawkish central bankers in Europe and elsewhere, and the tension that is building "as emerging markets fight the Fed":

Inflation fears—fueled by spiraling food, oil and raw material prices—are mounting around the globe, prompting the head of the European Central Bank to signal that it could raise interest rates in the future even though some countries have been weakened by the Continent's debt crisis.

In an interview with The Wall Street Journal ahead of this week's annual meeting of the World Economic Forum in Davos, Switzerland, Jean-Claude Trichet warned that inflation pressures in the euro zone must be watched closely, and urged central bankers everywhere to ensure that higher energy and food prices don't gain a foothold in the global economy…

An interesting development in light of the ongoing (or is it never ending?) European Debt Crisis. Rate hikes will just be adding insult to injury for the peripheral nations already struggling with a debt-deflation spiral. The price for being part of the Euro just keeps getting higher.

Inflation fears have yet to grip the Federal Reserve, for good reason. Back to the Wall Street Journal:

While high unemployment and spare capacity are restraining underlying inflation pressures in the U.S. and elsewhere in the developed world, annual inflation in China is almost 5%—and a sizzling 9.8% economic growth rate in the fourth quarter triggered fears of more price pressures ahead. Inflation in Brazil is even higher.

The next inflation crisis is not occurring in the US, as opponents of QE2 thought likely, but in the developing markets instead. To be sure, my sympathy for developing nations wore thin long ago. They will identify the Federal Reserve as the proximate cause of their problems, whereas they have only themselves to blame. Higher inflation abroad was the only outcome if the protocols of Bretton Woods II did not submit to the onslaught of QE2. And the Federal Reserve has very good reason to keep the pedal to the medal. A review of recent inflation behavior: 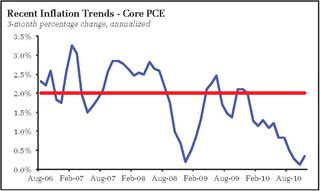 I have said this before – I do not see how this ends well. Given that the Fed is not likely to back down from this fight, emerging markets need to put the brakes on their internal inflation issues, the sooner the better. Otherwise they will be facing pain of a real inflation crisis, one that requires stepping on the brakes even harder. How this story unfolds this year will determine of the global economy can transition to a sustainable, balanced growth trajectory, or plunges into yet another of the seemingly all-too-frequent crises.

This post was republished with permission from The Economist's View Blog.